If you've been disappointed seeing all the international and dual-sim deals for the Galaxy S8/+ while the US unlocked models remain ignored, the day of reckoning has finally come. Now you can pick up the Galaxy S8 SM-G950U and S8+ SM-G955U on eBay for a pretty decent discount, at $599.99 and $699.99 respectively. If the S7 is any indicator, updates on the US unlocked models might be a bit late to arrive, but this is a good deal for Samsung's recent pair of flagships.

Any concern about Samsung's history of delayed updates for US unlocked devices might not apply if you plan on tossing a ROM on the phone. My understanding of the current development scene for the phone is that things are pretty limited right now. But, at least the option is there. Thankfully, both phones launched with Android 7.0 Nougat, so you should be ok for a little while yet. 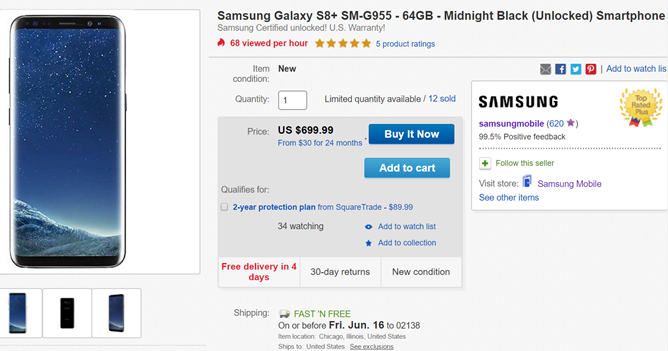 Both the S8 and S8+ are fantastic phones, and the DeX Station dock is even down to $116 through a third-party on Amazon. The eBay seller for this deal has high reviews, and the phones even ship from the US with a US warranty. If you've been on the fence about picking up an unlocked Galaxy S8, the reasons against it are rapidly dwindling. When you finally resign yourself to saving some money, free to check this deal out via the source link below.

The $599.99 S8, which sold out after we originally posted about the deal, has now been restocked.

What ever happened to Google's dual-tab "Feed and Upcoming" update?

The Play Store now fails gracefully when you're offline, offers to show pages when you're ...