Of all the smartphones and tablets that Google has released in recent years, those from the Pixel line have likely sold the most. I've personally seen more "regular people" using Pixel phones than any Nexus devices, and that can be attributed in large part to Verizon officially carrying the Pixel and Pixel XL. However, since Google never releases sales figures for its mobile devices, it's been difficult to tell precisely how many Pixels have been sold - until now. 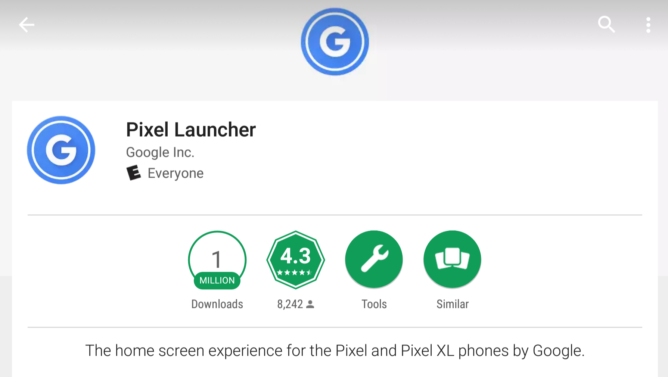 Our old friend Ron over at Ars Technica first noted this after noticing that the Pixel Launcher had just crossed the one million download threshold. Now, we couldn't make this connection with, say, the Google Now Launcher and Nexus devices since the GNL was only exclusive to the Nexus 5 for a little while, but the main version of the Pixel Launcher can still only be downloaded on two devices via the Play Store: the Pixel and the Pixel XL (the Pixel C gets its own, separate APK). Yes, there are nearly 1.4 million Pixel Launcher downloads on APK Mirror, but those obviously don't count towards Play Store numbers, and we highly doubt that Pixel users are going to APKM to download something they can easily get from the Play Store.

So, does this mean that there have been one million Pixels sold? Nope, the actual figure is less. The Play Store counts installs by the "(t)otal number of unique users who have ever installed this app on one or more of their devices. Only one install is counted per user, regardless of how many different devices they installed it on. Includes users who uninstalled the app later."

Here are a few scenarios that would cause that one million figure to get inflated:

Other scenarios such as installing new custom ROMs and having multiple accounts on one device wouldn't actually count since the Play Store only records one install per Google account, no matter how many times it's installed on however many devices, so the one million number probably isn't all that far off; however, it is literally impossible that there are more Pixel devices that have been sold than however many Pixel Launcher installs off the Play Store there are.

In roughly eight months, Google has sold less than one million Pixel phones. For comparison, Samsung reportedly sold five million Galaxy S8s in the first month, and Apple sold 50.8 million iPhone 7s in the last quarter. One million in eight months is nothing in comparison to those numbers. So while the Pixel is probably Google's best-selling phone yet, the company still has a ways to go before truly competing with the major players in the segment.