Back in March, we learned that Google may be working on a third device for 2017, called 'Taimen' (Google traditionally names products after fish). This third model would be bigger than the next Pixel and Pixel XL, codenamed 'Walleye' and 'Muskie' respectively. It's not known for sure that Taimen will be a larger Pixel phone, just that it will be larger in size than Walleye and Muskie.

Earlier today, we reported that Muskie has likely been cancelled, leaving Walleye and Taimen the only phones Google will reveal this year. Now it seems that Taimen may be manufactured by LG. 9to5Google spotted an issue on the Google Issue Tracker, titled 'USB PD Compliance Failure.' The second comment on the report seems to reveal that Taimen is being manufactured by LG, with the device being called "G011C" in the linked power report. 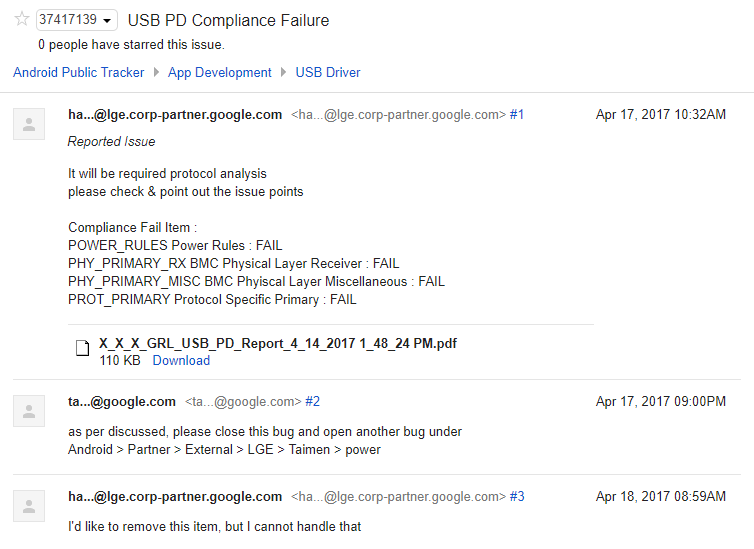 Our own sources have corroborated this claim. If Taimen is a larger Pixel phone, it could mean the two 2017 Pixels will have different designs, much like 2015's Nexus 6P and 5X.

Considering that the bootlooping Nexus 5X is still fresh on consumers' minds, with a lawsuit currently pending, it seems hard to believe that Google would be welcome to LG making another device. Personally, I'll be staying far away from Taimen if LG is the manufacturer (my Nexus 5 and 5X both died after about a year of use), but let us know what you think in the comments.