The new version of Pulse apparently rolled out yesterday, and it was a major update in more ways than one. Here's the changelog.

Notice ADT didn't mention the new security measures? The app is currently being swamped with 1-star reviews from people who are now locked out of their systems. The app pops up a message on modified devices that reads, "The operating system on this device has been modified or has a security issue. The Pulse app will not run on this device." 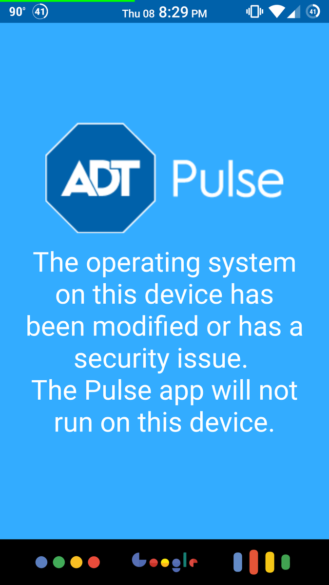 The notice (yes, we see the buttons and are as upset as you are)

This appears to affect rooted devices and even unrooted Samsung phones with tripped Knox. A few people claim their completely unmodified new devices are also getting this notice. Some more savvy users have even attempted to bypass the error with Magisk but that's not working either. ADT is going to need to respond to the complaints soon unless it wants to continue drowning in 1-star reviews. ADT isn't the only game in town. [Deal Alert] Finish off the week with 19 temporarily free and 18 on-sale apps, including 5 ...