Chrome 59 has just been released for Android and desktop platforms, with the most important new features being Animated PNG support and a new Image Capture API. Without further ado, let's take a look at everything version 59 offers.

GIFs have long been the image format of choice when it came to short silent animations or clips, but over the past few years, the format has started to show its age. GIF files can often balloon in size when used for anything other than short sequences. That's why services like Gfycat and Imgur, which convert GIFs to video files, have become popular.

Animated PNG (or aPNG for short) is one of several file formats created to replace GIFs, with support for 24-bit images and 8-bit transparency. Starting with Chrome 59, Google finally supports aPNG. The file format hasn't really taken off on the web, but Apple does use it as the file format for iMessage stickers. Take a look at the image below - if the ball is bouncing, it means your browser supports Animated PNG.

If you're curious, we compared aPNG to Animated WebP and GIF in this post. Firefox has supported Animated PNG since Firefox 3, released in 2008. Opera started supporting the format with version 10 in 2009, but stopped after the browser switched to Chrome's engine (once Opera updates to Chrome 59's engine, they should work again).

You probably know that web pages have been able to take pictures (with your permission) for years now. But all pages could do is take the pictures - not change any camera settings. The new Image Capture API, which is enabled by default in Chrome 59, gives web pages more control over your device's camera. 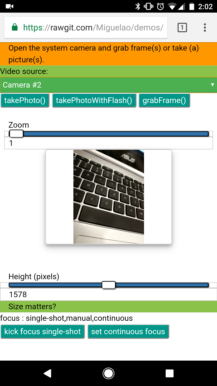 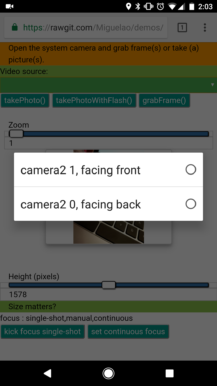 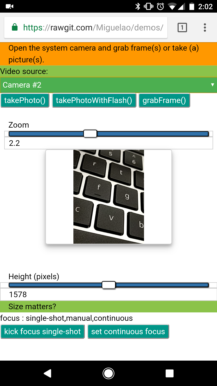 The new API makes it easy for pages to not only take pictures, but also to detect and switch between available cameras, use the flash, zoom in and out, and even focus the image. Best of all, pictures taken with this API are full resolution. Previous methods required taking a snapshot of a camera feed, which yielded lower quality images.

Just like with other camera APIs, you must give the page permission to access your camera(s) for this to work. You can try out a demo of the Image Capture API here. Just select a video source from the dropdown menu and allow access to your camera.

Google has been taking security with Chrome very seriously lately. Google plans to mark all HTTP pages with text entry fields as insecure later this year (in Chrome 62), but in the meantime, some minor changes have been included in Chrome 59.

First off, pages embedded using iFrames are no longer allowed to send notifications. iFrames are commonly used to embed advertisements and videos on sites, so there really wasn't a need for them to provide notifications anyway (outside of malicious ads).

Secondly, pages can no longer embed content from FTP servers (URLs starting with ftp://). At the time of writing, about 0.0002% of web pages accessed in Chrome do this, so you're not likely to notice this change.

Finally, Chrome 59 blocks requests for sub-resources that contain embedded credentials. For example, if a web page tried to embed a file with the URL "http://user:[email protected]/test.pdf," it would show a network error.

Like always, Chrome includes changes for both users and developers. Here are some smaller features that ship with Chrome 59.

[Deal Alert] It's Wednesday, so why not take a break from your mid-week and peruse 25 ...