As early as January, we learned that Android co-founder Andy Rubin's new hardware company was preparing to release a bezel-less smartphone sometime soon, and the anticipation has been building ever since. The new device was further teased with a mostly-concealed image, followed by a Twitter account just a few days ago, through which it was announced that May 30th would be the reveal date. That day has finally come, and it appears to have been well worth the wait as Essential is not only launching the expected phone, the PH-1, but also the world's smallest 360-degree camera attachment and a standalone smart home device.

First up, the phone. And those bezels. Or rather the lack thereof. It's truly a thing of beauty, taking the idea introduced by the LG G6 and the Samsung Galaxy S8 and raising the bar higher still. There is a small bezel below the 5.71" screen, but the top and sides are essentially bezel-less. You might expect a device of this type to include the front-facing camera and sensors in that bottom bezel, as per the Sharp Aquos Crystal and the Xiaomi Mi Mix. Instead Essential places it right under the LCD panel, within the confines of the screen at the top of the phone. This is not something we've seen before, and it will be interesting to see how the software is optimized to accommodate this. The PH-1 is a fair bit shorter than the Galaxy S8 but with a screen almost as big. The aspect ratio of 19:10 is also slightly less extreme than the 18.5:9 sported by the Galaxy S8 and the LG G6. The Essential phone's screen matches its competitors with a QHD resolution of 2560 x 1312. 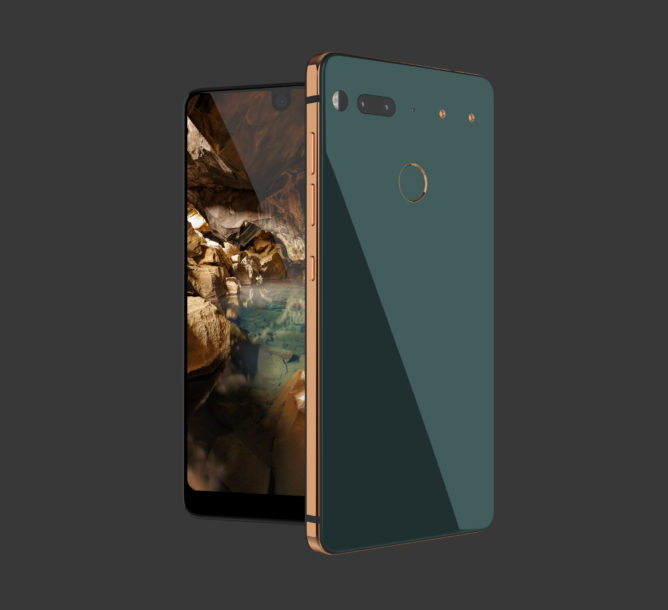 Aside from the crazy screen, the most interesting feature has to be the magnetic connectors on the rear of the device. Similar to the Moto Z and its Moto Mods, these connectors are there for the attachment of modular accessories. Two of those have already been unveiled, the most impressive of which is what Essential is calling the "world's smallest 360-degree personal camera." Similar to a Samsung Gear 360, it uses dual fisheye lenses to capture images and stitches them together to create full 360-degree videos. Its 12MP sensors can shoot QHD video at 30 frames per second, and the samples on the Essential site look pretty convincing. The other magnetic accessory we've so far caught a glimpse of is a charging dock the phone lies flat on, much like a wireless charger, allowing for quick access and easy removal. The two-part connector is barely noticeable on the back of the phone, and with some more compelling accessories Essential could capture the imagination where Lenovo/Moto has failed. 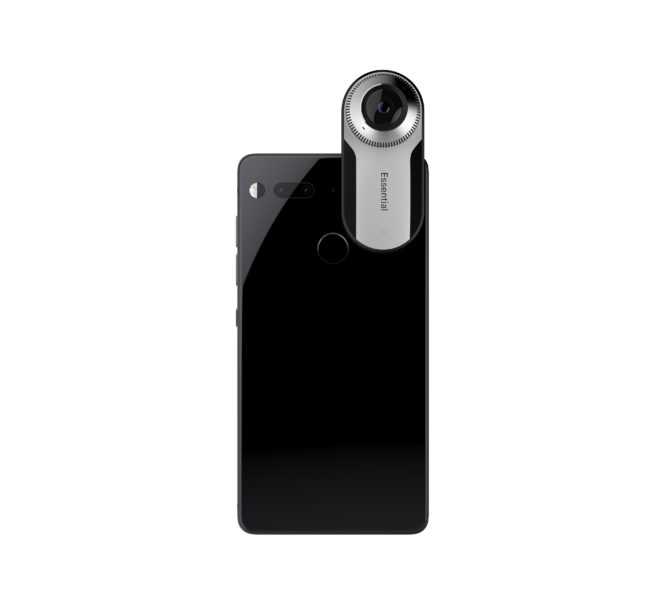 As for the phone's other specs, it's exactly what you'd expect of a 2017 flagship. It includes the top-of-the-line Qualcomm Snapdragon 835 SoC, 4GB of RAM, 128GB of internal storage, an Adreno 540 GPU, and a 3040mAh battery. It includes a 27W charger, which might even bring it near OnePlus' Dash Charge territory. The PH-1 has a dual rear camera setup similar to the Huawei P10, with separate full-color and monochrome sensors next to one another, and an 8MP front sensor capable of shooting 4K video. Power and volume buttons adorn the right-hand side of the device, and there's a rear-mounted fingerprint sensor below the camera module and the magnetic connectors. Essential is also talking up the phone's titanium construction, which it says stands up better than the aluminum used in most other flagships today. The titanium can be found on the body of the device, while the back is ceramic and the front panel is covered in Gorilla Glass 5. There's one particularly notable omission, that of the 3.5mm headphone jack. The inclusion of a dongle to allow you to connect your current headphones through the USB Type-C connector will likely annoy as much as appease, but there you go. For better or worse, it seems as though it's the future and we're just going to have to deal with it.

There's no mention of an exact release date but you are able to pre-order the phone from the Essential shop. It's only available in Black Moon or Pure White at the moment, but the more adventurous Stellar Grey and Ocean Depths will be available soon. It's going to set you back $699 for the device alone, but there's a special offer currently that will also get you the 360-degree camera for an extra $50. That's a saving of $149 when compared with the usual $898 for both together, a very good deal for those who are even a little bit tempted by the camera. It has to be said that the Essential PH-1 looks as though it's worthy of the hype, but we won't know for sure until we've had a chance to play with it. As soon as we get our hands on it, we'll let you know our thoughts.

As well as the PH-1 phone and its accessories, Essential also announced a smart home assistant device, Essential Home.

Andy Rubin was interviewed by Walt Mossberg for Recode as part of Code 2017 yesterday, and he gave us a short demo of the Essential phone plus shared some new details. Skip to around 14:30 in the video to take a look at the PH-1 in the flesh and also see that that nifty 360-camera in action. I must say the way the camera so easily snaps on to the back of the phone using the magnetic connectors is really satisfying.

New details we didn't know before:

The rest of the interview is well worth watching as Rubin talks about how he came to this point after leaving Google and also goes on to talk about Essential Home, his new company's smart assistant that he hopes will take on Google Home and Amazon Echo.

YouTube v12.19 includes the first signs of a new "reel" feature and an option to quickly clear ...