You know how almost every app or software store lets you buy apps and gift them to someone else? Well, you better put your dreams of ever doing that on Android to rest. Or burying them under 10 feet of disappointment. Someone at Google recently took a look at the Issue Tracker, saw the issue labeled "Implement Gifts within Android Market," which has been added back in 2010 when the Play Store was still the Android Market and which has gathered over 1100 stars and hundreds of comments from users requesting app gifting, and decided to be the bearer of bad news because you know what, this is "infeasible" and Google "won't fix" it.

But the writing has been on the wall for a few days; we could have seen it coming if we had been playing closer attention. Credit gifting disappeared from the US Play Store on May 16, and then the support page for Google Play gift cards and promo codes was updated on May 17 to replace the "Google Play credit gifts" section with "Google Play book gifts." That change clearly shows that credit gifting was completely gone, not a glitch, and that from now on, you can only gift music and books, but definitely not credit. 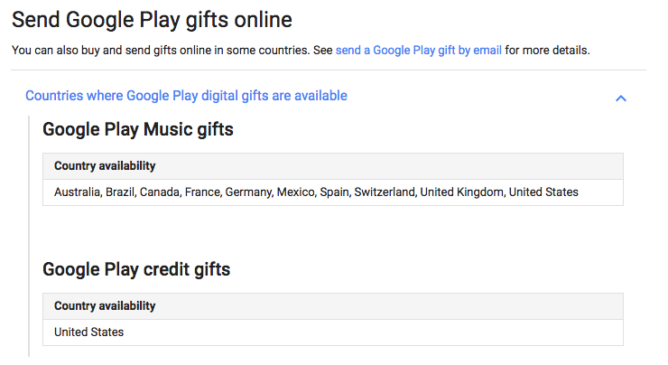 Above: Pre-May 17. Below: Current support page. 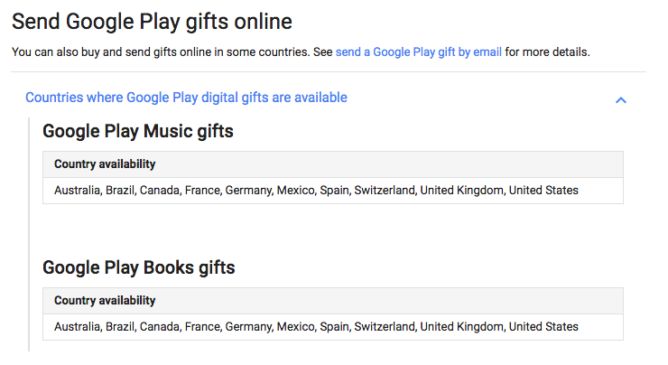 Put 1 and 1 together and you understand that the future of gifting or buying someone credit on Google Play is grim. You better kill your dreams of purchasing apps/games for your friends or employees, gifting a niece or nephew some Play credit for new  educational apps, or encouraging your parents to use a certain app by buying it for them. I still can't wrap my head around the fact that Google, the behemoth that can make AI understand every word I say and predict the news I want to read and the traffic on my way to work, is saying that app gifting is "Infeasible" when other app stores have clearly managed to make it feasible.

I'm sure there's a reason, but I can't think of any that would be unsurmountable for Google but not for others, or any that would apply to apps and games but not to books and music. The latter traditionally carry a lot more licensing and legislative limits than apps/games.

As a consolation, you can turn to Google Play gift cards and Family Sharing in the countries where they're available to share or send apps and games to others.

False alert. Issue was closed in 2013 because it was submitted to the wrong tracker.

I apologize for the false alert. It looks like the issue was actually marked as "Infeasible" back in 2013 because it was posted to the wrong issue tracker and couldn't be fixed by the AOSP team but had to be submitted to the Google Product Forums instead.

The issue has just picked up a lot of comments recently, which brought it to the attention of our tipster and thus our inbox, and with the recent disappearance of the Play credit gifting option, we incorrectly assumed there was a link there.

What remains true though is that credit gifting is completely gone and you can only send music and books now. There's no proof that app/game gifting wouldn't make an appearance at some point, so I suppose there's a silver lining somewhere.

[It's about time] Android Wear 2.0 is now rolling out to the 2nd-generation Moto 360