Jia Yueting, former LeEco CEO and founder of the company, is voluntarily replacing himself as CEO from the publicly traded arm of the LeEco conglomerate, to be succeeded by former Lenovo executive Liang Jun. Over the last 6 months, LeEco has been in the news quite a lot, seemingly going from crisis to crisis after its entrance into the US market. Perhaps this latest move will be able to help LeEco regain its footing. However, Jia Yueting will still maintain control of the private branch of the company that US consumers would be more familiar with as the manufacturer of the LeMobile phones.

Some of you might remember when LeEco decided to make its big push into the US market. That launch event probably set the bar for self-obsession. That isn't necessarily a bad thing in itself; there are a lot of different ways to build interest in a company, and many big names have built themselves on self-congratulatory marketing over substance. But, perhaps LeEco would have been better served by showing off actual products rather than the company's collective ego.

Shortly after the entrance into the US market, the company started to run into problems. Literally days later LeEco announced it was having issues stemming from its rapid global expansion effort. The billionaire CEO promised to invest $10 million into the company and cut his pay to $150K. The publicly traded arm even had to halt trading of its stock on the SZSE. At the time LeEco assured stockholders and customers alike that things were fine, and its planned acquisition of Vizio was still going to happen. Then the company tried to sell off the property it had purchased from Yahoo, which was once optimisitically planned to become an "EcoCity that houses 12,000 employees." Soon after, the previously reassured purchase of Vizio fell through, and now LeEco might have to let go of a third of its US workforce. 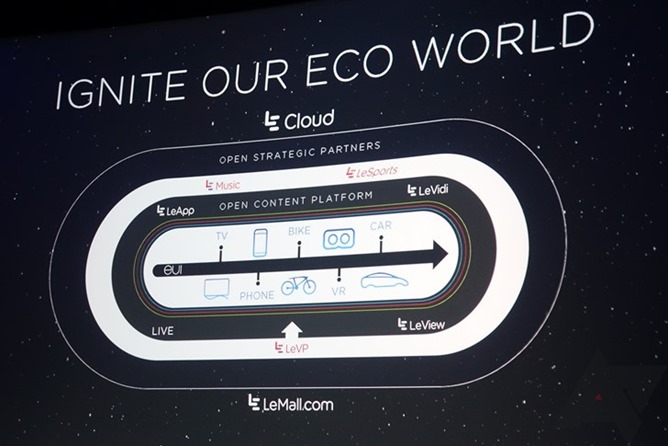 To put it lightly, LeEco has had a pretty tough year. Its entrance into the global market should have been a cause for celebration and increased profits, but instead, it's been a textbook case of overspending and overexpansion. Perhaps the board of LeEco's publicly traded arm was dissatisfied with the company's recent performance. Regardless of the motivation, it seems that going forward, the good ship LeEco will have a new captain for these rough international waters. Jia Yueting — the original founder and billionaire CEO of the LeEco conglomerate— is stepping down from his position. Former Lenovo executive Liang Jun will be replacing him.

As an aside, LeEco has a pretty complex structure. There is a publicly traded unit (Leshi Internet Information and Technology Corp. / Le.com) as well as a private company (Leshi Holding Co.). It seems that the new CEO is taking over at the publicly listed company, but Jia Yueting will continue to be chairman of the board for the public company, while still maintaining his role as CEO of the private unit. Since it is the private unit that is in charge of things like the LeEco mobile phone, automotive, and television businesses, these changes don't mean a whole lot in themselves.

However, In a statement made on Sunday, Jia said he planned for most of the conglomerate's businesses to be rolled over into the publicly traded unit. There's no precise timeframe on when that might occur. But, combined with the news of a new CEO, it seems Jia is genuinely ok with handing over control of his empire. He also expressed happiness that the publicly traded branch of the company will finally have a full-time CEO. Whether these changes are voluntary or involuntary, at least LeEco is making efforts to try to stay in business. More companies selling phones in the US will mean increased competition, which is good for consumers.

According to CNBC, things might be even worse for the US division than previously expected. A source claims that over 85% of LeEco's employees in the country may be let go. It's not certain, but tomorrow might end up being a pretty tough day for a lot of people, and I hope they can ride it out. We wish the best for everyone at LeEco.

CNBC is now reporting that 70% of the total US workforce for LeEco was let go today. It wasn't quite as bad as we had expected yesterday, but things are certainly worse than the 30% that was originally anticipated. Let's hope those affected are able to bounce back quickly.