With the dust settling after the deluge caused by I/O 2017, it's time to take a closer look at some of the many other things that came with out last week. Some interesting changes came with a brand new version of the Google Phone app included with Android O Developer Preview 2. There's a new prompt suggesting users send a message after a call fails to connect. A deep dive into the apk also turned up signs that Google is working on new RCS calling features and preparing some kind of backup option for voicemail.

Earlier this month, a teardown of of v9 provided a good hint that the Phone app would begin showing suggestions for messages to send after completing a call. With v10, that feature is now live, but not quite as functional as previously expected. 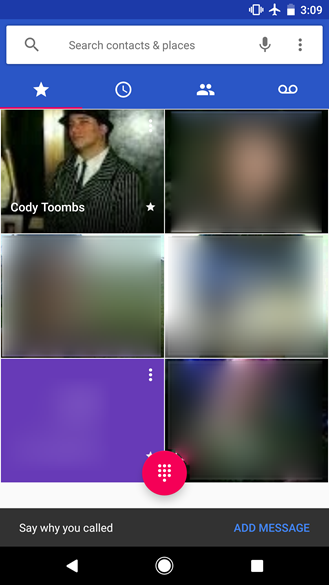 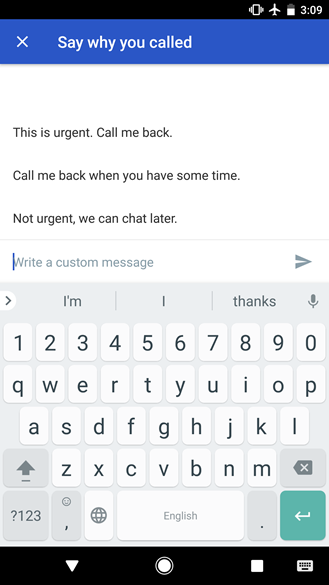 The post-call messaging feature appears as a snackbar prompt asking why you called, to which you can send a message. The prompt only appears after attempting a call that fails without making a connection. To be specific, the prompt won't show up if you hang up, a voicemail service answers, or anything else occurs that would be considered a connection. Basically, if you hear a sound indicating the other end is ringing, any outcome from that point on is probably not going to trigger the prompt.

You're most likely to see this prompt in an area where cellular reception isn't good enough to establish a voice call, but you can also force it to show up by trying to make a call while airplane mode is active. Otherwise, it's probably not going to turn up anywhere else.

If you opt to send a message, you'll be taken to a screen with a message box and three pre-written messages with different levels of urgency. Tapping a message will put it into the textbox below, but you can continue to make edits before sending.

The exact text of the prompt seems to be a mismatch for the current functionality, which left us wondering if this feature is also intended to work in other scenarios like when the call is redirected to voicemail or disconnects within a second of being picked up. Perhaps this is just the first step and other use cases will be handled in the future. In the meantime, this actually might be handy if you're in the middle of nowhere and staring at a single signal bar with no hope of making a call.

It's no secret that Google is working to add fairly extensive RCS support to both its Phone app and Android Messages. Now it's just a matter of which features are going to be added and when we'll get to use some of them. This update to the Phone app gives us a bit more insight into some new rich calling features that we'll soon have at our disposal.

A stack of new notification strings reveal that Google's developers are currently working on supporting incoming calls with additional data. At this time, it's clear calls can include a location, photo, message, or any combination of those. One line also mentions "attachments," which may suggest other types of data are supported, but not necessarily known in advance. This would make sense for things like URLs or specially crafted data packets can be handed off between other apps. It's also worth noting that these strings are split up for regular and "important" calls, which lines up with the commonly known feature allowing callers to indicate a degree of urgency.

It's not yet clear if attachments will be shown on the screen with incoming calls, but I think it's a pretty safe bet that they will be. After all, knowing there's a photo with the call isn't nearly as compelling as actually seeing it. This was part of the pitch for the Knock Knock feature when Google introduced the Duo app at last year's I/O keynote. The same certainly can be said about locations and messages, as well.

So far, there doesn't appear to be an interface for callers to actually attach this type of data, so it's safe to say development is still ongoing. Seeing as most carriers are still stuck on very rudimentary implementations of RCS and intra-network compatibility is moving at a sloth-like pace, I'm sure Google will have this done long before any of us would get to use it.

Are you the type of person that never deletes voicemails? This one might be for you. It seems that Google will begin asking users if they want to turn on "extra storage" when their voicemail inbox fills its capacity. This allows Google to "manage and backup your voicemail messages" to free up some space.

At this point, I should say that there are a few different things this could be, and I'm at a loss for which one it is.

For starters, this could be a new aspect for Project Fi subscribers and the included voicemail service. If so, it might mean Google intends to prompt people with a lot of saved voicemails to push the older ones into their Drive storage. It's a simple explanation, and might be an attempt to squeeze a few bucks out of people that never delete anything, but hardly seems necessary.

Another possibility is that this only relates to the voicemails downloaded and stored on your phone, which means it's just a basic housekeeping feature to keep unnecessary audio files out of your local storage or expand the quota to allow for more. I tend to doubt this is the explanation because the text doesn't really line up with that purpose and it seems like the type of thing that should happen automatically, users shouldn't even need to be prompted.

Finally, I'm going to take the opportunity to speculate about something a little crazy. Perhaps this is intended for the voicemail service provided by other carriers. If this is the case, I imagine the phone app might detect your voicemail is nearing capacity and offer to manage backups of it. If the user agrees, Google will connect to that provider's voicemail and proceed to back up all of the messages to Drive for the user, then delete them to free up space. Again, this is massively speculative and feels like a long shot... But it's also the type of weirdly cool feature Google occasionally comes up with.

There's not much else to go on with this, but it's entirely possible this feature / warning / error message is already live. It may only show up for users connecting to a specific carrier or with special circumstances that aren't very predictable. I'm not really the right person to test it since I only have three voicemails saved, but perhaps readers with a larger backlog will have something to add to this.

The latest SwiftKey beta adds support for Cantonese and other new typing languages, plus more ...