Google spent much of the I/O 2017 keynote talking about machine learning. In fact, we heard the phrase "AI first" as a description of Google's current plans. You probably have a little sliver of Google's AI capabilities in your pocket right now—Google Assistant. There's one place in particular Google really wants Assistant to live, and that's in your car.

Voice commands in general are extremely well-suited to the car, so it should come as no surprise that Google had two Assistant-infused "Android Automotive" demos on-hand at I/O—one from Volvo (above) and another from Audi. It's more clear now than ever that Google wants to be the smart interface for your car, and it plans to do it with Assistant.

Your car with Android

The Android Automotive project (just an internal name for now) was rumored in 2016, and the first demo of such a system was showcased at CES early this year. This is distinct from Android Auto, which Google released alongside Lollipop. However, it took several months before the first aftermarket head units and new cars arrived with support for the platform. Progress on Auto has been slow ever since. It does barely anything now that it couldn't do at launch. Perhaps that's because Google is currently more interested in making Android the car's operating system.

With Android Auto, your phone simply projects an interface to the car's display, but Android Automotive is a car that actually runs Android as its infotainment system. There have been cars running Android before—many Honda and Hyundai vehicles still do, actually. They're very old builds that are almost completely unrecognizable as Android, though. By working with automakers, Google can make the interface more modern and get its services embedded in the car. The two Android Automotive concepts being demoed at I/O were surprisingly full-featured. Check out our video from the event if you want to see how Android in the car actually works.

One of the first things you'll notice about this new take on Android in the car is that it's fast... well, faster than Android Auto. Android Auto tends to lag heavily at times for no discernible reason. The fact that it's still preferable to the stock in-car software is a testament to how little automakers have innovated in this space. The two interfaces demoed were also very different from each other, indicating Google might give automakers even more freedom to modify Android than phone OEMs do. Actually, the Volvo interface was visually similar to Volvo's current software (which is not Nougat, obviously). Both demos were based on Android 7.0 with an eye toward migrating to Android O when it's final.

Importantly, Android Automotive runs Google services and Android apps without connecting an Android phone. The apps are essentially the same as the ones you currently use in Android Auto. They're limited to audio and messaging apps, and you do have to wonder how long those apps and services will be up to date. Phone updates can take ages, and cars could be much worse.

An often expressed fear is that a car with Android-based infotainment features will eventually become extremely outdated. After all, you keep a car much longer than you do a phone. Will the apps and services running on that car ever be updated? Will developers eventually drop support for in-car apps on these older versions of Android? There are a lot of unknowns right now. 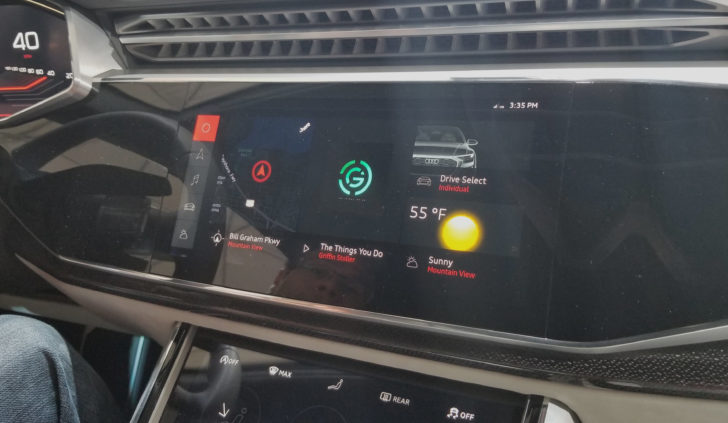 Googlers seem to have a go-to line when you ask about updates to Android-infused cars—they talk about Project Treble. Google is cognizant of the fact that automakers seldom update the software on cars, but the hope is that updates will still happen occasionally if Google can make it easier. There's also a lot of talk about Assistant in the car, and I had several Googlers cite this as a way to make apps and services more accessible while you're driving regardless of what version of Android your car runs. Apps installed in the car might not be updated very quickly (or at all), but that's not a concern in the cloud.

After connecting an app or service to Assistant, it's accessible from your phone, a Google Home, Android Auto, or even a car running Android that hasn't seen an update lately. Thus, developers don't necessarily have to worry about specifically supporting old versions of Android in the car, they simply need to take advantage of Assistant.

You can do things with Assistant voice commands that are very much outside the bounds of road-safe media and messaging apps. Assistant's smarter voice commands have the potential to be extremely useful while you're driving. There was a wall of smart home devices next to the Volvo car in order to demonstrate how you could adjust your humble abode in advance of your arrival. Hot day? Crank the AC before you roll into the driveway. You also have more control over the car with Assistant as part of the car's OS—for instance, you could control the climate or open the sunroof, which isn't feasible in Android Auto.

Having Assistant built into the car also means more people will use it. Even iOS users who don't have an Android phone to plug in will be able to use Assistant in these vehicles, and that gets them into the Google ecosystem.

Assistant is very much hit or miss right now. Sometimes you ask Assistant a question or issue a command only to be greeted with a cloyingly polite apology. Still, it's getting better, and some of the things Google demoed could be great experiences. Regardless of possible update issues down the road, Google's involvement with car infotainment will lead to more modern versions of Android at launch, and Assistant could help your car's software remain useful.