Cartoon Network's latest update to the Android app has finally added Chromecast support. Allegedly this has been one of the most requested features for the application, although I am not surprised it took so long to be included. Content distributors are pretty picky when it comes to platform availability. At least now my living room TV can become the dedicated Powerpuff Girls streaming machine it always should have been.

Turner Broadcasting (and through them, Time Warner) is the owner of Cartoon Network and has been pretty protective of its assets in the past. It has played with many different methods of content distribution over the years. I remember Turner even entertained the idea of a free unlimited streaming library for Adult Swim before it decided to take things over to Hulu. I'm actually pretty surprised it would do something like this since it might potentially undermine that partnership with Hulu. Obviously, the selection in the app without a cable provider is much smaller. But even so, by allowing people to stream Cartoon Network's content to their TVs outside the service, the value of Hulu for Cartoon Network watchers is a bit diminished. I hope that this is a good sign for future consumer-friendliness. 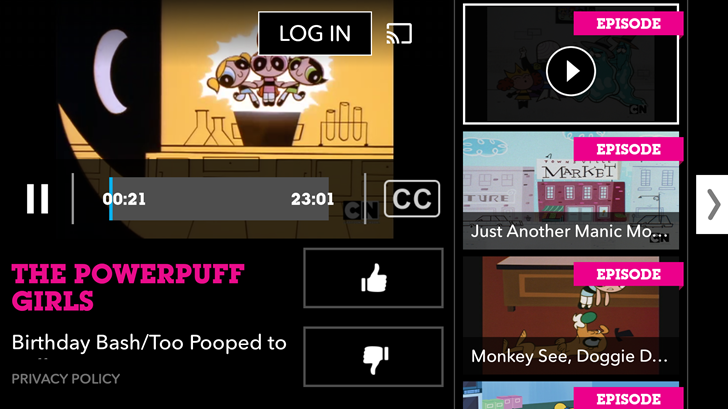 The change works about as you'd expect. If you have things set up to stream using your Chromecast, you'll find the usual icon available in the corner of the little streaming window. Give that a tap, and it shows you the list of compatible devices nearby or connected to your network, and you can start streaming. The quality is pretty much unchanged, so don't expect the older low-resolution shows to look any better on your TV. The full, rather verbose, changelog is available below:

I guess this only leaves one question. So, Turner Broadcasting, where's our Chromecast support for Adult Swim?