Downloading massive files isn't always convenient, especially if you don't have great Internet. And unless you've still got an unlimited data plan, letting the download continue while you're on the move without WiFi is just a bad idea. Google seems to agree, as Android O's second developer preview now features a 'pause download' button. 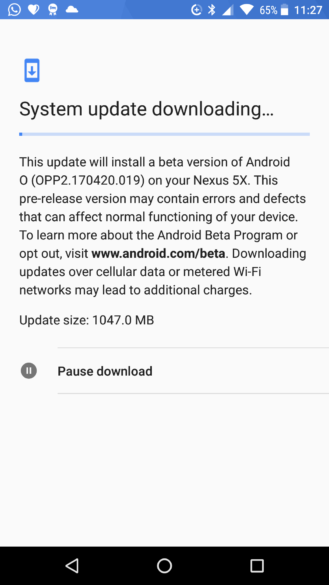 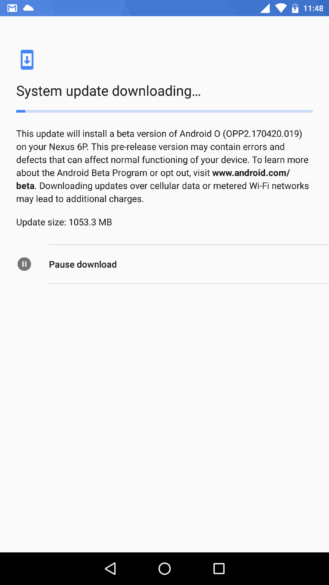 Pausing downloads on Android isn't exactly new; for instance, it's been in Chrome's built-in downloader since Chrome 50. It is extremely helpful, though. Imagine that you've got incredibly slow WiFi at home and you're trying to download a large OTA, but you have to head off to work, where there isn't any WiFi. Without the pause feature, you'd either have to leave your phone at home, or you'd be stuck in a whole loop of re-downloading the same portion of the update every night. Obviously, this is a somewhat niche situation, but it does show the practicality of such a simple addition.

The 'pause download' button may also be restricted to larger updates. We didn't recall seeing it (or getting any tips about it) for the minor 0.019 update we saw the day before yesterday, but we did for the larger update that was sent out to fix the previous one for Nexus devices. This would make sense, as pausing a download for a ~50MB update wouldn't really be necessary.

Elliott Hughes, an engineer at Google, spotted this article and made a few observations in a Google+ post. Firstly, the 'pause update' button is actually part of a new Play Services update, though we're not sure which version exactly. Secondly, the feature isn't actually restricted to larger updates, as we'd initially speculated; it's just hard to notice on smaller downloads. And lastly, it turns out that interrupted downloads should have picked up from where they left off. So while my very specific example may not have been accurate, putting a visual cue to pausing/resuming is definitely helpful.