NVIDIA's SHIELD TV is one of the best Android TV set-top boxes on the market (though the competition isn't that heated threr), but it's also quickly becoming one of the best overall video set-top boxes, even with Roku, Amazon, and Apple in the game. It was only a couple of weeks ago that the SHIELD TV added 4K streaming from Google Play Movies, and now it's announcing a couple of other improvements to its casting feature.

A new Google Cast Receiver update has opened up new capabilities to the SHIELD TV and NVIDIA was quick to jump on board and verify they all work as intended. These are:

NVIDIA was nice enough to provide a new comparison chart for casting capabilities between its SHIELD TV and the Roku Ultra and Fire TV. The head-to-head doesn't do either of those any justice, proving how far behind they are in supporting several sources. 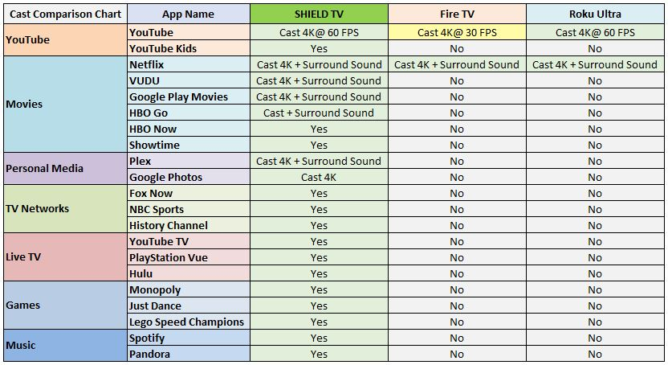 However, if I'm not mistaken, this is a look at the "casting" functionality only, which is the ability to send or mirror something from your phone to the TV, and it doesn't say anything about local apps for directly streaming through these set-top boxes. The difference might not be as dramatic in that regard, but it is telling that Android TV (and SHIELD by extent) really make it easy to move from the small screen on your phone to the large screen on your TV with little hassle and without losing on options and quality.