This OTA bumps the version number to OPP2.170420.019 and is weighing in at anywhere between 38.8 and 55.9MB, depending on which Google device you have. One tipster informed us that Pay is no longer throwing him an 'unsupported in this build' message and shows him a normal screen with his cards, but hasn't tested whether they're working or not. It appears that Pay has been fixed via a server-side update, which is why some people who have had trouble updating their Nexuses can now use the Pay app. 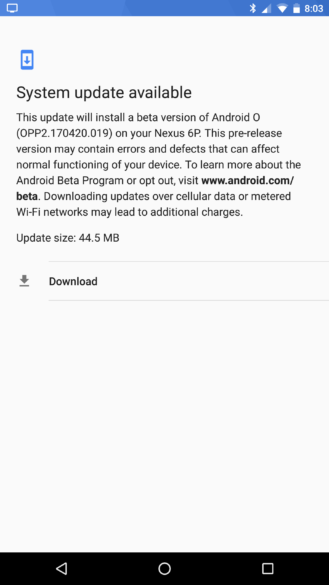 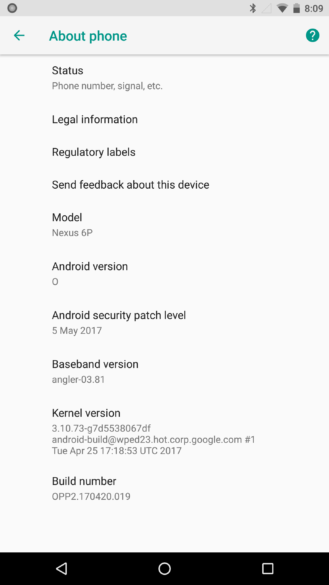 A rare, successful install on a Nexus 6P.

While the update seems to be installing just fine on Pixel and Pixel XL devices, a majority of owners with Nexus devices appear to be having some trouble. From what we can tell, units of Nexus 5X and 6P smartphones, as well as the Nexus Player, are throwing errors and showing the dead Android logo in recovery. After a hard reboot, the devices are booting up fine, but they remain on yesterday's OPP2.170420.017 build. One user is claiming that Android Pay has begun working for his 6P, despite the install appearing to fail. However, there are users successfully updating their 6Ps to the 0.019 build. (update: It looks like those who flashed the O factory image are updating without issue, while those who took the OTA from Nougat are struggling. This is due to devices that updated from Nougat via OTA retaining the 7.1.2 build fingerprint. Flashing the factory image and then taking the OTA should get the update to work.)

Factory image and OTA downloads are not yet available. An official post in the Android Beta Program Google+ page states that the update will hit all devices currently enrolled in the preview within the next few hours, but given the installation failures that Nexus devices are seeing, it's likely to be halted. We'll update this post with more information when we get it.

Google is now sending out a full OTA, measuring in at around 1GB, to Nexus devices that were unable to update due to the incremental flash fail. Additionally, 0.019 factory and OTA images are now available to download.