OTA updates are amazingly unpredictable. Sometimes, the US versions of devices get them first and international variants have to wait weeks and months, other times it's just the opposite. The latter is the case of the LG G5. My fiancé's unlocked model got the OTA around last December in Lebanon, but apparently the US unlocked version has been lingering on Marshmallow until now. That's a 6-month delay — whoa.

Well, the OTA is finally (never has this adverb been so rightfully used) rolling out to that variant of the G5, which is lovingly called the RS988. It weighs over 1300MB and when it installs, it pushes your device up to software version RS98821a, Android 7.0, with the April security updates. It's one version of Android old and one security updates month behind, sure, but at least it's newer than what the device had before. 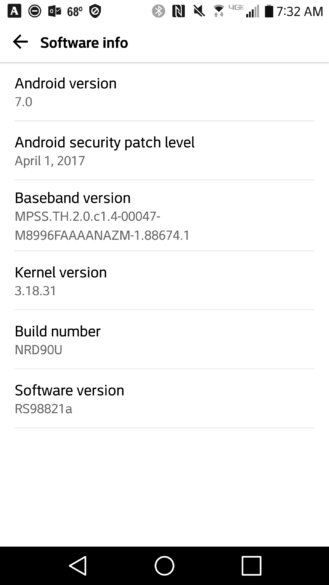 You should see the notification for the update on your device soon, but if you don't, you can always manually check for it from the settings. And in case you're wondering how late this OTA is, consider that the Sprint version got the update in November, followed by TMo and Verizon short after, and AT&T lagged behind until February. The unlocked one took its sweet time until now.