Samsung Pay's slow advance continues. Last month new markets in Sweden and the UAE were given support for the platform, and today it looks like the UK is up next. We have yet to see a confirmed report or press release from Samsung — as they have done for their other market roll-outs. However, their Google Play listing for the application has been localized for the UK.

The UK rollout for Samsung Pay was expected to begin sometime this month so the timing would seem to align with that. If you aren't familiar with the platform, it's one of the few things that makes me slightly envious of Samsung phone users. Instead of just having NFC for contactless payments, like Android Pay does, on devices with supported hardware it is capable of using MST (which is super cool). That allows you to use your phone at many older non-NFC terminals that accept magnetic stripe payments. 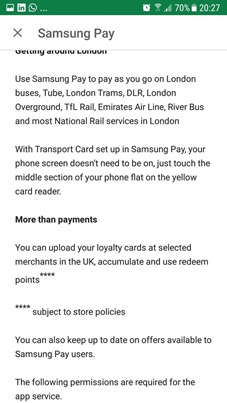 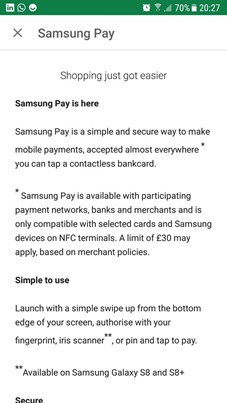 One user on Twitter has reported seeing the update on his Galaxy S8, and our own look into the app listing for the UK has shown localization changes for the UK market, but there is no telling exactly when those changes occurred. If any response from our inquiries to Samsung is forthcoming, should they post a press release, or should user reports come in that the app is working on their phones, we will update this post. As of now we don't have any official confirmation from Samsung for the UK release outside of the app localization on the Play Store.

Samsung's site has information about the UK, so things are definitely live and launched, at least with the banks MBNA, Nationwide, and Santander. I would expect more to be added in the coming months.

[Update: RUU] AT&T's HTC One M9 is being updated to Android 7.0 Nougat