HTC launched the U Ultra early this year, but the reviews were largely negative. Now, the company looks to be preparing for its "true" flagship in 2017 with the HTC U11. We've seen a few leaks of this device, but nothing as good as this. It seems someone who attended a briefing with the phone jumped the gun and posted their hands-on. We get plenty of angles on the phone and a demo of the new Edge Sense feature.

The original YouTube video was quickly taken down, but it has been mirrored. The video isn't in English, but Reddit has helpfully provided a translation.

The same design aesthetic we saw with the U Ultra is on-display here. The U11 has a high-gloss glass frame in several colors, all of which I'm sure pick up fingerprints amazingly well. Like the U Ultra, there's no headphone jack—the Type-C is the only port. At least you get a Type-C to 3.5mm adapter. It's also IP57 rated for water and dust.

The U11 comes with HTC's long-rumored Edge Sense feature, allowing you to trigger actions by giving the phone a squeeze. In the video it's used to launch the camera and take a photo, open Assistant, and launch apps. The force required to launch Edge Sense can be adjusted in the settings. 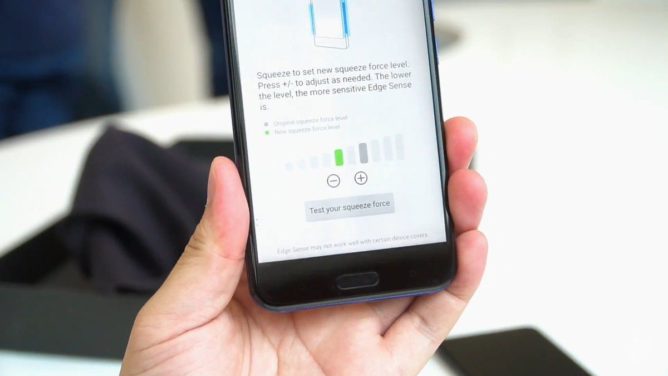 The U11 will have a Snapdragon 835 (the U Ultra was stuck with an 821) and 6GB of RAM in China. Everyone else gets 4GB. There's also a 12MP rear camera and 18MP front shooter, which is bizarre. We don't know the price or launch date, but there will probably be more official news soon. Anyone who was actually thinking about buying a U Ultra might want to hold off for now.

Asus is reportedly done with Android Wear and the ZenWatch line

Motorola officially announces the Moto C and C Plus, won't be available in the US