We all thought that the Moto X brand was no more after the Moto Z was revealed as the successor to the Moto X Pure Edition (2015), but it's coming back. The first time we heard about this was last week, when leakster @evleaks tweeted a picture of some 'moto x⁴' branding, but we now know much more about the device.

While the video was unfortunately filmed vertically (say no to vertical videos!) and is out of focus for most of its duration, there's still a ton of info that we can glean. And by 'we,' I mean /u/iwantatrophy on reddit, who deciphered the audio to reveal that the X4 would have a 5.2" 1080p screen, the brand new Snapdragon 660 chipset, 4GB of RAM, 64GB of storage, laser autofocus, and a massive 3800mAh battery. Those are some good ears /u/iwantatrophy has.

From the presentation slide itself, we can see that the phone will have a metal body, 3D glass (almost certainly just glass with slightly curved edges), a 'smart camera,' IP68 water and dust resistance (a rarity for Moto), 'AI integration' (perhaps a custom voice assistant à la Bixby?), always-on voice (most Moto devices already have that), 3xCA (3x carrier aggregation), and Turbo Charging. 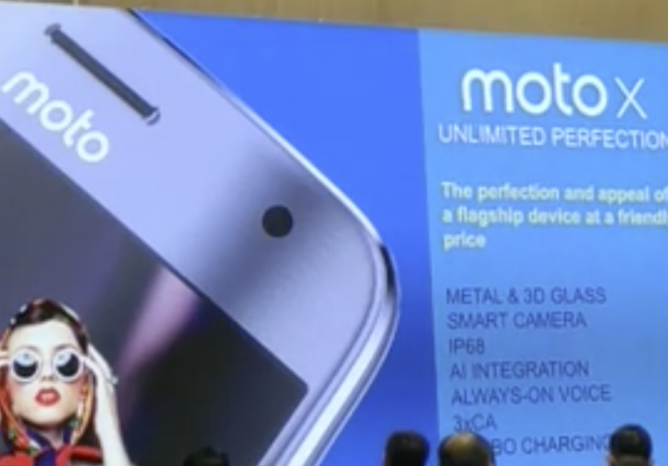 We can also see that the power and volume buttons are mounted on the right, a flat Motorola logo, dual cameras and a dual LED flash, a bluish color on the front, some 'moto' branding, and an earpiece (which may double as a speaker). Interestingly, there are no pins on the back for Moto Mods. Overall, it's a decent-looking phone that follows the same design language that Motorola has had since Lenovo took control.

No dates were given regarding a public announcement or launch, but considering how Motorola is already showing this presentation privately, we shouldn't have to wait long to get more information on the X4.