The Galaxy S8 only just launched, but a post on Reddit outs T-Mobile's plan to offer a solid buy one, get one (BOGO) deal on the GS8 and GS8+ starting tomorrow. As with all carrier deals, there are plenty of little catches. Still, you can get a (mostly) free phone.

The first thing to know is this deal requires you to buy both phones, then you get a rebate for one of them several weeks later. You have to get both phones (either GS8 or GS8+) on the installment plan, and one of them must be on a new line with unlimited data (i.e. T-Mobile One). If one line is an upgrade, it also has to be on unlimited data. The rebate will be in the form of a prepaid MasterCard and has a maximum value of $750—the full price of a Galaxy S8 before tax. While you can get two Galaxy S8+ devices, T-Mobile is only covering the value of the regular GS8 in the promo. 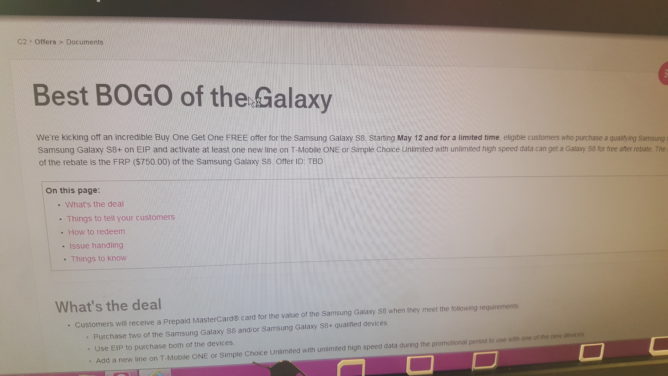 Additionally, anyone who rushed out and bought the GS8 at launch is not eligible for this deal. Those people are conveniently past their 14-day buyer's remorse period. This promotion is supposed to be official tomorrow (May 12th), at which time T-Mobile will probably send you a text message about it.

T-Mobile has made this deal official. The details appear to be identical to the leak.

[Deal Alert] T-Mobile and LG running 'buy one, get one' promo for LG G6