Nexon's Titanfall: Assault has soft launched on the Google Play Store. It is a free-to-play release that is not currently available in most countries. Luckily the APK can be found pretty quickly in order to sideload it. So, this is what I did, and I am here to give a brief overview of what you can expect from the gameplay.

I suppose there is no better place to start than with the tutorial. It begins with a few normal screens where it explains in detail how you can deploy your soldiers. Right after this, you are given some tools that you can deploy to the field. These tools are called Burn Cards, but not even once is it explained what these cards do. I mean sure, you haven't even been given a reason as to why you are even playing the game, so why take time out of the tutorial to explain your basic tools? Once the card's uses are completely glossed over, you will then be taken abruptly out of the tutorial to be given a loot crate. This crate is called Cache, and in this instance it contains Titans which you will then immediately use once the game forces you (abruptly again) back into the tutorial. This back and forth continues throughout all 4 sections of the forced practice tutorial.

Now, one thing I would like to point out is that games with forced tutorials such as this tend to be focused solely on getting you hooked on the gameplay before you find out how many in-app purchases are intrinsically tied to advancement at a normal pace. Considering Titanfall: Assault's IAPs go as high as $109.99 per item, the puzzle pieces start to form an all too familiar picture.

Okay, back to the game. Once you get through the tutorial, you are given a few options as to how you can play. The thing you need to understand is that Titanfall: Assault is a multiplayer only strategy game. That means you are given the option to either play in ranked or practice matches. The ranked matches will allow you to earn more rewards than the practice matches, but both are played against live opponents online. You can also practice against the AI for no reward, but what fun is that?

Despite the overly complicated presentation of the game, the action elements of the gameplay use a pretty simple mechanic. You take one end of a small stage, and your opponent takes the other. Both players have a deck of cards they can use to deploy units, titans, and burn cards. Each card requires a set amount of points to deploy. These points have a limited replenishing pool. Once you deploy any of your units, there is little else you can do to control them. While I can appreciate the tactical aspect to this design, the fact that you have no control over your units leaves a lot to be desired for the game's AI. Units will go just about anywhere they please. It may be obvious they need to fall back to defend your base, but that isn't going to happen. In all actuality, this style of gameplay is pretty similar to playing a one-on-one MOBA where you are tasked with taking out the other player's base before time runs out. If it does, then the person with the most points wins. Sadly the game never once explained how you earn these points.

The other main aspect of the gameplay is how you earn new cards through winning Cache from ranked matches. As you unlock these cards you will get the option to upgrade them as well as equip them to your playable deck. This is where the real core mechanic of the game lies. Very little skill is needed for online matches thanks to you not having any control of where your units move. What really counts is the ability to own all of the best cards. While you can grind ad nauseam for the ability to upgrade, most people will never have the fortitude to stick it out. You can, of course, upgrade your cards quickly by purchasing Tokens, which can then be used to purchase Credits, which can then be spent on upgrades. This convoluted method of using multiple currencies is done on purpose in order to disguise how much you are spending in real world money. 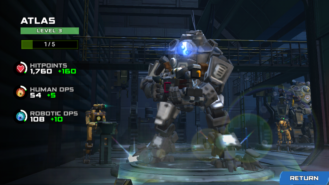 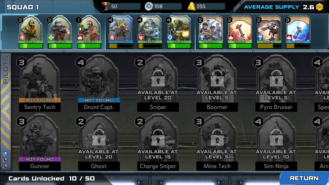 Performance is another area I'd like to cover. Honestly, it isn't all that great. I experienced a ton of lag, and my device got sweltering hot playing for even the shortest of sessions. If you were hoping for a way to turn down the graphical settings, yeah, you can forget that. If you don't have a high-end device, I won't hold onto any hope that Titanfall: Assault will perform any better for you.

It is also worth noting that there is support for a Google Play Games login, but it currently does not look to support GPG's leaderboard, achievements, or cloud saving. This lack of support could be due to the game still being a soft launch title, but I'm not quite sure I would hold my breath to see the functionality added. I did, however, notice that there is support for an in-game leaderboard connected to your Titanfall: Assault username.

It is sad to see, but Nexon has taken a popular FPS franchise and turned it into a Clash Royale clone. Frankly, I am amazed that they had the restraint not to include a screaming angry man icon. The fact of the matter is that Titanfall: Assault turned out to be everything I expected. It has horrible optimization. There is no challenge to the gameplay short of finding the money necessary to pay to win. Even the mechanics are designed so poorly that you will win more often by your time running out instead of ever completing your set goal of destroying the enemies base. Everything about this release screams cash grab, and the sad part is it will probably work out for them.