Messaging apps are a hot business lately, and Snapchat is one of the hottest. I mean, all the kids are using it, and kids are never wrong about anything. Snap (the parent company of Snapchat) just announced its earnings for Q1 of 2017, but it didn't really earn anything. In fact, it lost a stupendous amount of money, about $2.2 billion.

Snap managed to make just $149 million in Q1 while it spent $2.3 billion. It was only spending a few hundred million in previous quarters, but in early 2017 the company encountered about $2 billion in costs related to its IPO. Even without that loss, Snap is burning through twice as much money this year as it did last year. The company also reported anemic user growth in its earnings; a mere 5% increase since last quarter to a total of 166 million active users. 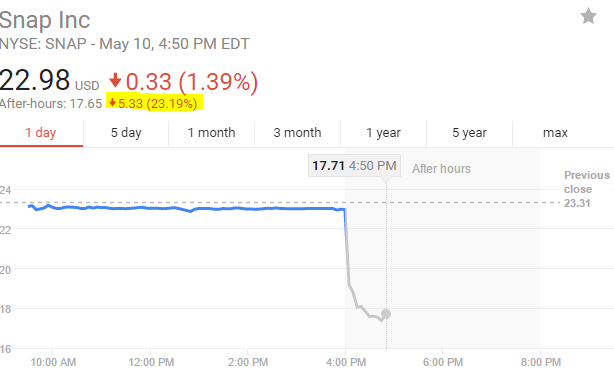 Investors were not pleased with any of this news, although Snap tried to put a brave face on things by talking about all the billions of snaps people are creating. Still, the share price for Snap is down 20-25% in after-hours trading. This erases all the gains since the IPO in March. Too many more quarters like this and Snap might have trouble attracting investors.