Google and Coca-Cola's partnership effort for in-store advertising displays looks to be bearing fruit. The advertising system uses DoubleClick's preference and tracking data combined with Google's Beacon Platform to serve up targeted ads by pulling data from passing smartphones. With that info, displays are able to select content based on your preferences in the form of advertisements specifically targeted to passersby. In a recent grocery store pilot program the Minority Report-style ads performed quite very well.

This isn't actually that new. It was discussed at a few places in the last couple months since the details were revealed at Google's conference. But, it seems to have quite effectively flown under the radar for that time, considering how cool it is. Coca-Cola made a detailed post about it on one of their social promotion sites in April as well, in which they talked about the potential environments for these tracking signage systems, like movie theaters and other Retail venues than just grocery stores. 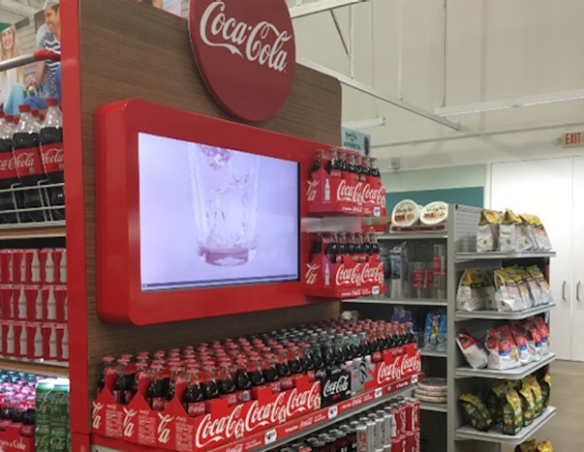 Google's partnership with Coca-Cola for this system has been discussed off-and-on for a few years. Back at the National Automatic Merchandising Association's OneShow in 2016 Google talked about the potential as applied to vending machines, and said that Google and Coca-Cola were working together on Bluetooth beacons for vending, but this is the first time I've actually gotten to see what it looks like and how it performs. Coca-Cola's Greg Chambers, at Google's recent Cloud Next Conference, said that it has been experimenting with small tests into proximity marketing since at least 2015 when they first started working with Google on a prototype.

The two companies tested things with a pilot for the system in 250 Albertson's grocery stores, in which Coca-Cola saw some incredible results. There was a one year ROI on Coca-Cola products displayed by the system, and a spillover effect from so-called "category-lift," in the form of a total one-month ROI for all nearby soda products — i.e., this system sells a lot of soda for Coca-Cola and all other brands near it. There's no word yet on when or how Coca-Cola might roll this out to other stores, but given how positive the results were for the pilot tests, it is likely you'll see one someday at the end of the soda aisle in your local grocery.

On a more technical note, I'm not sure exactly what sort of data is being sent to the displays by nearby phones or how it is taken. Allegedly the system uses Google's Eddystone beacons, which exchange information with nearby phones using Bluetooth low energy. This is the first time I've heard of Google's Beacon Platform actually being used, combined with DoubleClick's targeting advertising systems, to target people in the physical world. The privacy-conscious might express some concern at the potential of having your phone communicate your preferences to an in-store display, but I would hope and assume that any identifying information is stripped out. Either way, we're one step closer to this.

Netflix updated to v5.0 with HDR video for LG G6