Has it ever annoyed you how outdated Street View is where you live? Is that garish new shopping mall still a pile of rubble left over from the beautiful period building that stood before it? Or did you want to do more than just take photographs of that exotic market you walked around on your last trip? Now you can take matters into your own hands and create your own space with a "Street View ready" 360 camera.

Using the Street View app with one of the new cameras, you'll be able to take raw footage which will then be automatically stitched into the same interactive experience we've come to expect from the Google Maps spin-off. There will be 20 different Street View ready cameras launched over the next few months and each will fall into one of the following 4 categories aligned with certain use cases:

Street View Product Manager Charles Armstrong took to Google's blog, The Keyword, to announce the news and talked up the advantage 360 footage has over static images in conveying the precise atmosphere of unfamiliar surroundings. While this is undeniable, it remains to be seen whether the average user will care enough to fork out for (presumably rather) expensive equipment in order to better share their holiday experiences. 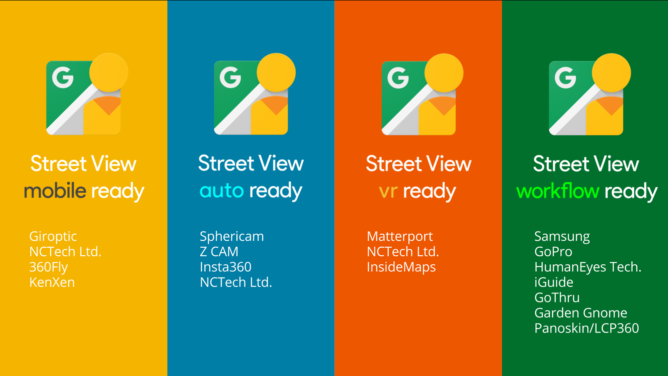 Many of the 20 incoming 360 cameras will be unveiled at this week's Street View Summit in Tokyo, Japan. You can learn more about the Street View ready program on Google's Developers site. To download the Street View app, use the Play Store link below or you can grab it manually from APKMirror.