For a couple of months now, Google Home users in the US have been able to easily order shopping from a range of US retailers through the Google Express service. Now, those in the UK are going to be treated to a similar luxury, with supermarket Tesco adding support for ordering with the Google Assitant via a clever little workaround — using a special IFTTT recipe.

Following a recent update to Tesco's IFTTT channel, it's now possible to make use of recipes such as "OK Google, add [something] to my basket" to include items in your next order. You can edit the phrase to be anything you want, too. So you could say "buy more milk" or "procure another kilo of caviar," and the integration will do the rest. 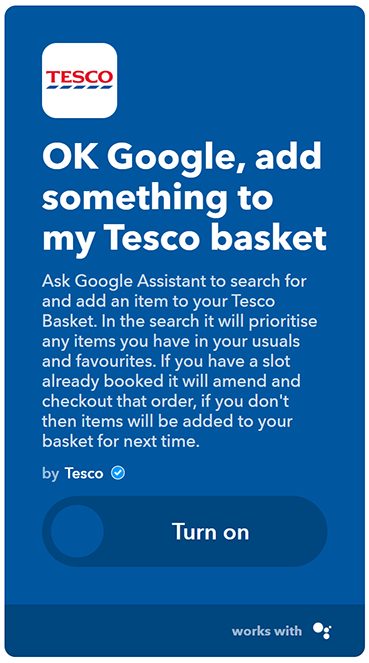 The service will be particularly useful if you've been using Tesco home delivery for some time as it will default to favorites you already have on your account and otherwise try to give preference to items you've previously purchased. Another rather helpful feature is that when adding something once you've already finalized an order, the app will automatically amend it to include the recent addition, so long as it's not already out for delivery.

Tesco is the biggest supermarket chain in the UK and it's great to see its support for technology still in its infancy. It's also especially impressive that rather than wait for Google to roll out Express in the UK (which could be a way off) it's found another way to make use of Google Assistant and compete with Amazon's Alexa in the process.

To give it a try you'll need to live in the UK and have a tesco.com account. And you'll also need the IFTTT app, which you can grab using the link below or from APKMirror.

You can now make snaps without timers, loop snaps, and erase bystanders in Snapchat