This is a buying guide, but I would be remiss to just point you at a list of microSD cards with no information to make your own informed decision. If that’s what you are after, feel free to scroll straight to the bottom and enjoy. But, if you’re interested in exactly why I recommend those cards and want to understand what to consider when making the decision yourself, then I encourage you to read on. Consider this your daily dose of wiki-hole science as applied to the subject of microSD cards.

The SD Association has done a terrible job of marketing different features for microSD cards. There’s more than a bit of confusion I’ve seen in discussions around terms like UHS-I and U3, and what different classifications mean. I think the SD Association should have considered a different way to name UHS-II cards going forward to prevent confusion, wiping the slate clean with a new more logical set of names, or perhaps an augment to the microSD marketing term itself. In the meantime, I hope the following explanations can help with your future purchase decisions.

Many moons ago SD cards were simple and classified as Class 2-10 devices, a name based on write speed in MB/s. Packaging included additional modifiers like SDHC and SDXC. Each of those came with a different revision of spec as a means of differentiating new from old from a marketing perspective. SDHC brought bigger sizes and faster speeds to the SD specification, and SDXC further extended those sizes and speeds, as well as mandating the use of the exFAT filesystem. Nowadays they just end up being one more bad marketing acronym attached to a ridiculously long product name on Amazon, but thankfully there is enough overlap with some of the SD Association’s new marketing babble for you to safely ignore those particular acronyms in favor of the new ones. Bringing us to… 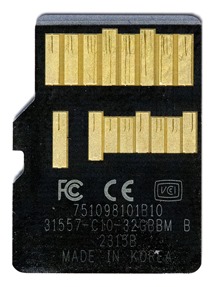 UHS, defined in 2010, is the newest marketing method for enumerating bus types from spec 4.0 forward in SD/microSD cards. There is some overlap, as UHS-I and the old and descriptively named “high-speed” bus introduced in spec 2.0 can both cover similar speed ranges, but they do so with a different bus. That’s because UHS is a definition of the bus the card uses, not the speed of the card directly. However, the speed is going to be at least partly dependent on the bus-type used.

So, that’s all a bit confusing in itself, but even the specifications for the individual UHS types are a bit hard to grasp sometimes. The UHS-I definition is a bit... nebulous. Originally it was a 100mhz bus at 50MB/s peak, but now it has provisions for a faster bus allowing up to 104 MB/s. But really, the best way to think of it is that UHS-I just means whatever max speed they can pull most recently from the standard microSD pin layout.

The SD Association has done a terrible job of marketing different features for microSD cards.

UHS-II, defined in 2011, has a different physical pin layout compared to UHS-I. The extra row of pins increases the available bandwidth to 150-300ish MB/s. To be able to use a UHS-II card to its fullest, you’ll need a reader or device that has the extra pins and corresponding bus. Right now no phones have that, and some users have actually reported slower speeds with UHS-II cards in UHS-I devices compared to UHS-I cards.

UHS-III is pin-compatible with UHS-II, but with double the bus speeds compared to UHS-II, so a theoretical max somewhere in the range of 300-600MB/s.

So, we said UHS defined the bus speed, and it does. But, UHS Speed Class sets the actual minimum speeds of the cards from a marketing perspective. Just like UHS-I and UHS-III are numbered for bus types, UHS Speed Classes have yet another confusing method of enumeration. These are the numbers you see on cards like U1 and U3, sort of like the old Class 10 or Class 6 specifications you might remember. Unlike the bus specifications above, these numbers are meant to define minimum sequential writing speeds. U1 denotes 10MB/s, and U3 30 MB/s. Above and alongside those are yet another letter/number metric, the Video Speed Classes: V6, V10, V30, V60, and V90. Again, each denotes the minimum sequential write speed in MB/s, but they may exceed that number at times. It’s inconvenient that they’d have three different sets of classifications that slightly overlap, aren’t interchangeable, and which use vaguely similar but distinct letter and number combinations. But, at this point, it’s a bit obvious that the SD Association isn’t known for their efficient marketing. 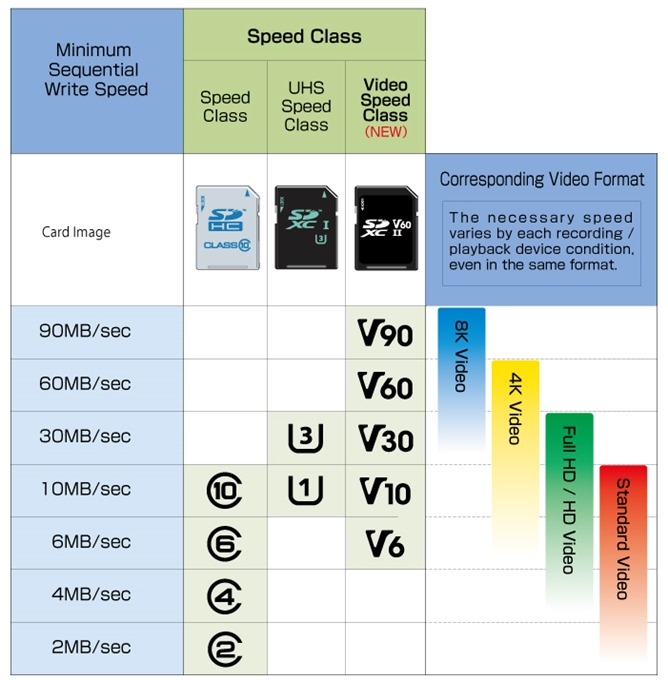 Thankfully, they put together a nice chart of all their different speed classifications. With three overlapping naming schemes, and the much more sensible option to just market speeds directly if needed, that should cover all of a user’s potential needs, right?

With the 5.1 spec, the SD Association decided to throw in yet another non-descriptive letter-number combination marketing term. A1/A2, or App Performance Class 1 and 2, are meant to denote that a card is good enough to be used on a mobile phone by apps, in addition to media storage. The minimum requirement for A1 is based on random read IOPS exceeding 1500, write for the same exceeding 500, and a sustained Class 10 / U1 / V10 / 10MB/s sequential write. App Performance Class 2 was added to the specifications in February, but as of yet no cars make use of it. It requires a minimum read IOPS of 4000, write of 2000, and sustained sequential performance of 10MB/s

Now we get to the meat of things. Knowing what terms like UHS, U1, and A1 mean gives us the ability to make an informed decision about what, exactly, we’re buying. A bit of warning, YMMV. Any estimated speeds are going to be under close to ideal circumstances, your device might not be able to reproduce that. 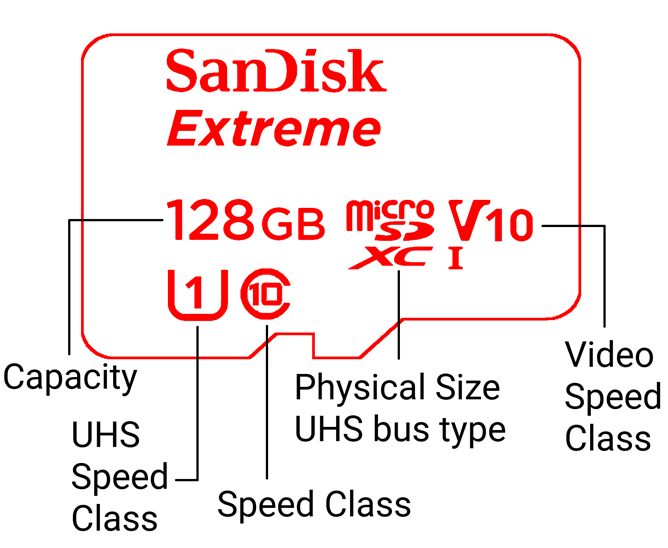 Originally, I was going to put a ton of links to various SD cards here, with descriptions for each. But, frankly, there are just too many. It would either be a flood of near identical Sandisk SKUs (and it's already pretty close to being that due to the sheer number of Sandisk cards), or a list trimmed not to favor any one brand too much and therefore not provide you with the best picture. Instead, I’ll be listing some grouped specifications in a sort of general hierarchy from most ideal to least, with examples of cards that meet them.

There are only a few brands I'm comfortable giving my personal recommendation for, but don't let that stop you from finding similar specifications from a brand that is not listed or which you prefer. I'm just a fan of SanDisk since they've been making inexpensive SD cards for years and doing a decent and reliable job with it. Samsung might be exceeding them at the high-end right now, though, and would probably be my choice for a larger-capacity U3+ card.

As of now, no phone supports UHS-II or UHS-III, so there is no need to consider one. As a useful note, anything marketed as V60 or above is probably going to be UHS-II or better.

Surprise! There are none. SanDisk announced one back in January of 2017, and another at MWC, but right now you can't actually buy a card that says A1 anywhere on it. We reached out to SanDisk for this article, and they confirmed that it will be available late summer in the North America region. Tough break, as it’d be at the top of this list, otherwise.

These aren’t ideal for app use like A1 cards will be, but they’re better than nothing. And unfortunately, they're pretty much the fastest you can get right now. Expect sequential reads in the 90MB/s range, sequential writes up to the 70-90MB/s range (though at U3 you are only guaranteed a minimum of 30MB/s), and random reads and writes not to go much past 10MB/s. Really they are more suited for media storage, but app performance might be ok. If you have a recent phone, they're probably nowhere near what your internal storage will provide, though.

U1 cards really only pull about half the speed of U3 cards, best case scenario. They’re only really rated to hit a minimum of 10MB/s on write. They might exceed that, in some cases by a fair amount, but it’s not guaranteed. With these, I’d really only consider their use for media storage and playback, and even then just for middling bitrates.

I can't really recommend any cards below this level. Don't let that stop you if you know your requirements, but anything below this speed is going to be pretty old, and most companies don't manufacture stuff below U1 / V10 / Class 10 levels anymore.

That rounds out the list. Sorry if your particular card wasn't included, there are a ton other manufacturers that were not mentioned and which might make decent products as well, but I can't necessarily vouch for them myself. Thankfully the information in the article applies to all cards, so you should be in an improved position to find something that fills your needs regardless of brand.

We'll be keeping this up to date, so if any new products launch we'll be sure to add them. This type of post might be a regular thing, so keep an eye out for more in the future and good luck shopping.

Google is testing a new search UI, and it looks awful