According to this roadmap of G Suite features that has appeared in a presentation from Google's Cloud NEXT 2017 event, Google Calendar has a "redesign of web interface" planned for Q4 2017. If that is what it exactly says it should be, then we will finally have that brand spanking new Calendar UI on the web that we've been dreaming of and that we can only achieve with themes and extensions right now.

Below, you will find the entire slide of G Suite's usability features roadmap — check it out to see if there's something else planned that is interesting. I've also linked to the exact moment it shows up in the video of the "G Suite Product Roadmap — 2017 and beyond" presentation. (The video is from the EMEA satellite event with Dennis DeMeyere presenting, but it should be the same presentation as the one in San Francisco.) 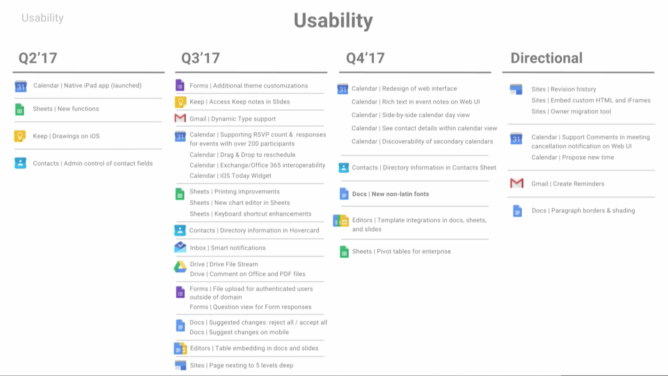 Nothing in here says "Material Design" or "new and shiny and colorful and clean and modern," so we can't jump to conclusions just yet. But at least we have hope that at some point in Q4 2017, Google Calendar on the web will look less like the lost bastard child of a 2013 one-night stand.

Google bakes phishing protection into the Gmail for Android app

BlackBerry KEYone review: A tale of a decent phone full of annoyances