As referenced in the section header, these tags are voted by users. Sure enough, there's a Vote for Tags button allowing you to give your own appraisal of the film's themes. Here you'll find pre-defined tags such as Fast-Paced and Tense, or there's the option to suggest new tags entirely. It's not clear if Google itself defined the initial set of tags to be used or if they were all user-generated from the beginning. It also remains to be seen what kind of vetting the suggested tags go through before they become available for selection but, given the internet''s propensity for trolling, you would imagine it's fairly rigorous. 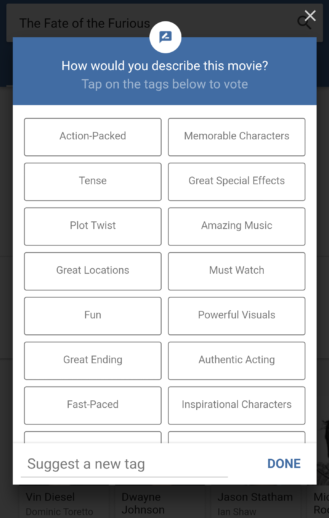 Select from pre-defined tags or suggest your own.

It could be a useful feature if done right, but there's not much to go on so far. It may even be just a test among a small number of users that won't end up seeing a wider release. Google is known to carry out such tests on a regular basis (see Youtube). Or it may be that this is the beginning of a full rollout in the Google app and even desktop search, too. Only time will tell. Let us know in the comments if any of you have encountered this new tags feature yet.