No more toggle for auto-add to the home screen 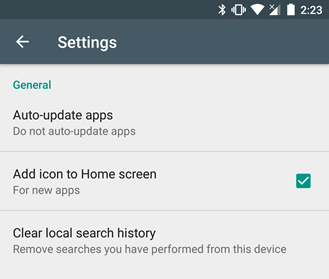 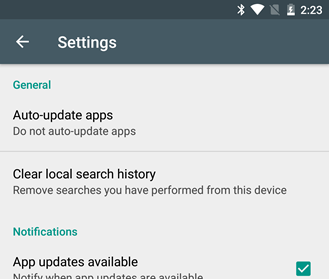 The one functional change some users will probably notice right away is the disappearance of the "Add icon to home screen" toggle in the Settings screen. Don't worry, this doesn't apply to every device; in fact, it only appears to impact Nexus devices running the Google Launcher. The toggle remains visible on my Pixel with its default "Pixel Launcher" and my S7 edge using the Google Launcher.

So, does this really matter? Probably not after a matching toggle was recently added to the Google Launcher. Oddly, the Pixel Launcher doesn't trigger the setting to go away. Perhaps that will make more sense later.

While I haven't tested this with other launchers, I'm not sure what happens on different devices that have multiple launchers installed or where a third party launcher is set to be the default.

This does bring up a point of consistency. Perhaps this is just the first step in a process of getting numerous launchers to add this feature on their own, and that would be fine. However, if it doesn't happen, users will have a hard time instructing each other on where to go just to find this simple setting. 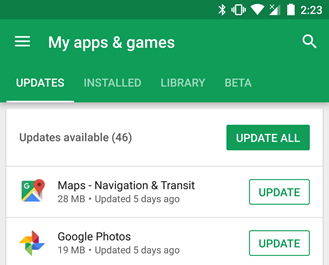 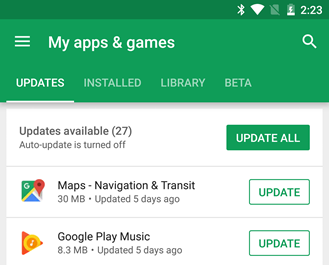 The other notable change you'll find lurking about is in the Updates tab of the My Apps screen. This is also a conditional change, but it's bound to whether or not you have Automatic Updates enabled. Whatever your setting, you'll now see a message reflecting this status located below the count of pending updates.

There's no button to instantly enable automatic updates, but there's probably no need since most users would have to intentionally disable the feature to get to this point. This might technically be there to nag users, but it's non-intrusive and objectively helpful for anybody that switches settings from time to time, so I think it's good.

Instant Apps are getting closer

It's no mystery that Instant Apps are in development, Google has been talking them since the announcement at I/O 2016 and we've covered some of the early tests. But, we're not really there yet. Google is still keeping things limited to select developers and hasn't really done much to let anybody else know what is required to build software capable of acting like an Instant App. In fact, unless you know exactly which apps to try and how to use them, we may as well not even have Instant Apps at all. The closest most will get are the updates to a small Play services support package that enables support. However, things just got a little more interesting.

The latest Play Store update includes some notable settings that will be used with Instant Apps when they become available. Right now, it's basically just a new Settings screen, but it includes a few key features like the options to completely disable Instant Apps or change the account they will associate with if one is needed. Evidently, only a single account will be supported at this time? There is also an option titled "turn on required setting" that will allow the links to be opened in apps. Yeah, that probably should be turned on.

Implementation details are scarce, but this release does reveal a couple of specifics that I don't recall seeing before. Notably, there is now a syntax that can be defined in the AndroidManifest.xml of an installed app to make activities, services, and other components visible to Instant Apps. All a developer will have to do is add a visibleToInstantApps parameter and an instantapps.clients.allowed meta tag to anything they want to expose.

This stands out in the Play Store app because three things have already been given this treatment: The main Play Store activity, a URL handler, and a service for performing in-app purchases. The IAP service should need no explanation since even Google pitched Instant Apps as a way to perform transactions of various types in a native interface. The other two activities are likely there to give users an upgrade path to actually install the full version of an Instant App if they decide it's worth keeping on a device.

All in all, this still doesn't really mean Instant Apps are ready to go live. However, with Google I/O 2017 closing in quickly, it's hard to imagine the event could pass us by without formally launching. I suppose we'll see in a couple of weeks.

Welcome to Google's branding department, get ready to say a new name. The new entrant to the game is called "Play Protect," and it's basically the formal name for the malware scanner included with the Play Store. The previous update included evidence that there were things happening with the scanner, and now it appears that it's important enough to warrant its own official name.

The text includes the standard Learn More links and even the promissory statement that installed apps have been "Verified by Play Protect." Beyond that, there's not really much to say, it just looks like Google is trying really hard to up the visibility of a built-in virus scanner. Of course, this much attention may also suggest Google is working on something new. Again, we'll just have to keep an eye out for details, especially at I/O where an on-stage presentation might make for good press.

Building hype for a major new release is so standard in the gaming industry, it's actually weird when it doesn't happen. Meanwhile, most mobile games get less attention than emails from a Nigerian prince with a foolproof plan to make everybody rich by moving money through our personal bank accounts.

Google extended an open hand to big game developers in 2015 by introducing a pre-registration system to the Play Store that allowed users to sign up for games before they were officially released, and then receive a notification when the time came. Plenty of games and a few apps have taken advantage of the feature, but it's not really that special since pre-registration does nothing more than promise a notification.

Clues in the latest update suggest Google may be taking things to the next level with real incentives for users to join the waitlist. New text in the apk mentions "pre-registration rewards" and target milestones that are met when enough people join the waitlist. Naturally, this type of system is used to encourage users to spread the news via social networks in hopes of building toward that next target. After all, word-of-mouth advertising is the holy grail... Or something like that.

Strictly speaking, I'm making a small assumption that this is related to games and apps, while it actually could be intended for other types of content like books and movies, which also have similar pre-registration features. However, these markets aren't known for milestone-based rewards, so I think the assumption is well-founded.

Marketing programs like these are usually very successful and might go a long way toward encouraging major game studios to give a little more attention on mobile platforms where they've had a lot of challenges in the past.

I can't think of much else to say, but I think we should all look forward to the inevitable promise of extra in-game currency to early registrants.