The Galaxy S8 and S8+ are probably the two most excellent phones to have come out this year. And that isn't an empty statement. After all, they won our editor's choice "Most Wanted" award during our recent review. Let's break down, then, exactly why they deserve your attention. 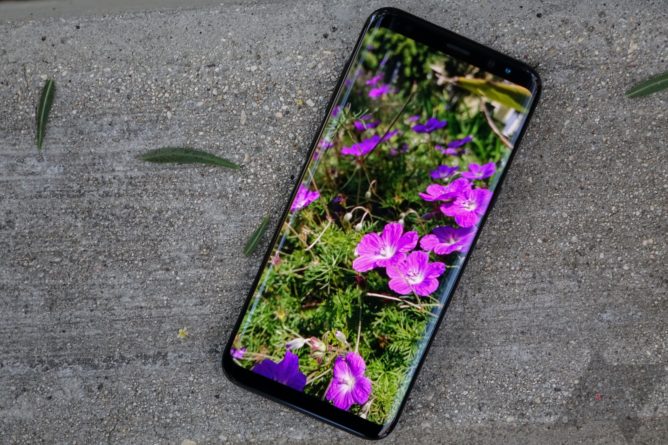 Without a doubt, the screens on the Galaxy S8 and S8+ are incredible. I don't mean that the shape and change in aspect ratio are interesting, or that the curved edges make it cool, or that the almost ridiculous 1000 nit peak brightness gives you incredible outdoor performance, or anything so pedestrian as that — though those are all pretty fantastic features too. The big thing is that it gets right what so many other phones get terribly wrong on a very basic level: color. The three calibrated color modes on the display are ridiculously, stupendously accurate (aside from the red tint issue).

Some people like a screen that at a glance seems to look good, but often that sort of initial "wow" factor is just a result of oversaturation and a blue white-point, both of which stand out on a brightly-lit showroom floor. While that might make a good impression at a quick glance, when you actually get to viewing any photographs or films you pretty quickly run into issues with accuracy in what you're seeing. Those pictures you send your friends might not be as bright or fun as you think they are on your screen. It's not just that you only see part of the picture, you literally see none of it (or at least none of what is actually there).

Thankfully Samsung included three calibrated modes on both the S8 and S8+: Basic, which targets an sRGB space; AMOLED Cinema mode, which targets the expanded DCI-P3 space often used in film; and AMOLED Photo mode, which targets Adobe's expanded RGB space. Next time you view or take a picture on your S8, you can be certain (if you're in one of these calibrated modes) that what you see on your display is fairly accurate to what is actually there. How else can you expect to know what something might look like on another display? Being blue is for Eiffel 65. 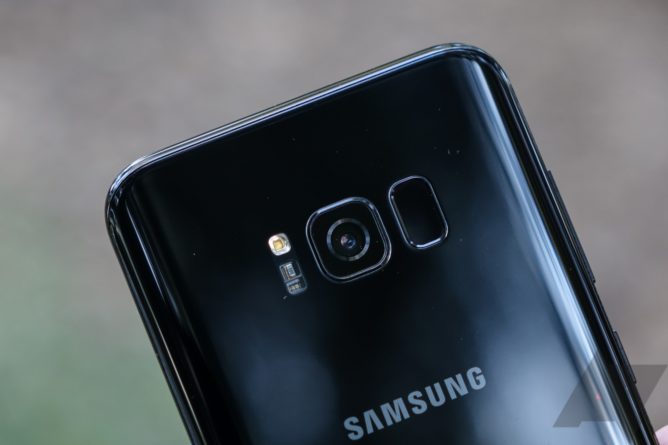 It might fall just a tiny bit short of our current favorite in the Pixel line, but the camera in Samsung's latest flagship comes very close in some areas and beats it soundly in others. It has a new sensor over the S7, but some of the changes since last year may also lie in Samsung's incredible steps forward in image processing. The new Spectra ISP on the Snapdragon 835 might also be playing a part in the improvement.

The most impressive feature of the camera is its incredible low-light performance. The f/1.7 lens and dual-pixel autofocus, combined with Samsung's new processing magic, have resulted in superb detail and focus in poor conditions. Any complaints about over-sharpening images that one might have had with the S7 have been soundly addressed.

Another exciting and not-often-mentioned bonus with the S8 is the optical image stabilization, and I'm not just talking about the back camera. The front camera has a currently-unused OIS mount. While it might just have been a scrapped feature, it's possible that it could be enabled in the future. The S8 might just be a few steps away from mitigating the contemporary horror of a blurry-but-otherwise-perfect selfie.

HDR on the phone might not reach the heights that it does on our beloved Pixel, but it comes close. We did note some small problems with blowout in very high-contrast circumstances, but it's nothing too terrible. Similarly, the camera isn't quite as quick to launch as it is on the Pixel, but these are very tiny differences, and a small price to pay for the improved low-light performance. 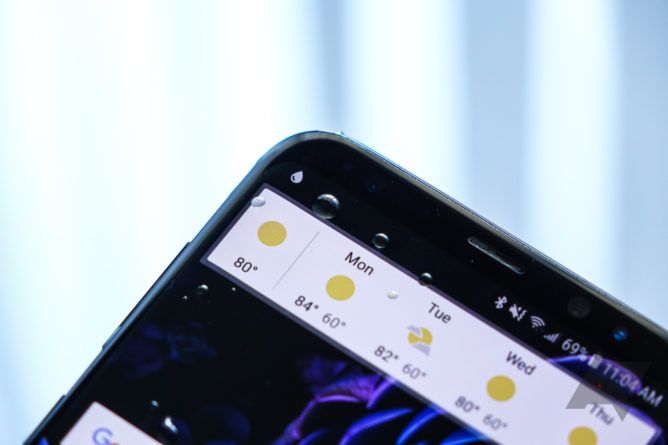 Those of you in possession of a calendar may take note of the year: it is 2017. These days anything without some degree of water resistance is a bit ridiculous in its own way. It was even a point of contention against the Pixel in our review. It comes as no surprise, then, that the Galaxy S8 line has a full IP68 rating, just like its forebears, providing water and dust resistance up to 1.5 meters of water or 30 minutes.

If you live in a city where you walk instead of drive, rain is a thing that happens. And, sometimes it happens onto your phone. All it takes is a downpour that was noticeably absent from the day's weather reports to soak you and your lack of preparation clean through. But, if your phone is water-resistant, an event like that remains firmly in the territory of inconvenience and not tragedy. It isn't the sort of thing you think you need until it's too late to want, and with the S8 you won't have to worry about it.

We were able to pull up to 6 hours of screen-on time, which is pretty solid. We got around 5 hours in our experience with the Pixel, so the improvement here is nothing to sneeze at. Getting much higher than that isn't likely to be too handy outside of normal daily activities. After all, if you work a standard 9 to 5 schedule, that means you can spend almost all of your non-working time on the phone in a given day. Short of forgetting to charge the phone or a particularly long day, it is unlikely anyone with normal levels of usage would run into any problems. Granted, our readers are a pretty special breed. We demand a bit more from our phones. Nonetheless, it should be adequate even then.

The phone also includes Qualcomm's Quick Charge 2.0 tech. It's a bit on the older side, but you can fill things up somewhat quickly at around 15W, or somewhere in the neighborhood of a bit under half the total capacity in a bit over half an hour. That makes it perfect for topping things up before you've got to run, though it isn't quite OnePlus Dash Charge fast.

There are other options you can tweak to further stretch that out, like disabling the always-on display. You can also change the resolution it renders things at, but if that has any effect, it's going to be small to the point of insignificance outside of GPU-intensive activities like games. 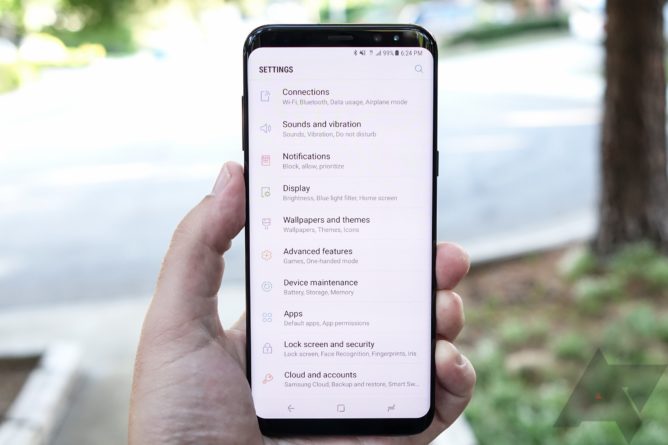 This isn't something I ever thought I might say, but the software on the S8 and S8+ is actually pretty solid. GraceUX isn't what TouchWiz used to be, and that's an excellent thing.

For one, Samsung finally joined the future of flexibility with their on-screen buttons. You can change the order and background color, the tyranny of fixed and permanent hardware keys is over. The always-on pressure sensitive home button is also a nice addition for those that might miss some of the convenience of a hardware home key. The snap window feature is also a legitimate improvement over Android's own multi-window implementation, letting you crop a specific area in an app and make it into its own window. If you're the kind of person that wants a picture-in-picture for convenient YouTubings, then it's a pretty handy feature.

There are also some pretty handy audio-related software additions, like a dual audio option to stream the same source to two Bluetooth devices, or the ability to separate sound between apps for purposes like isolating one particular service to your Bluetooth speaker. That way no one at your party will have to put up with the music being interrupted when showing a few friends that hilarious video.

Other significant but, perhaps, not-quite-top-five features include: general speed on the Snapdragon 835, microSD support, Bluetooth 5, dual-sim functionality on some models by region, and the super-fast combination of Qualcomm's X16 modem combined with 4x4 MIMO and 256 QAM support (the non-technical may read that as it can pull some pretty incredible speeds on 4G). Alas, it gets hard to boil a device down to five salient features when it's got so much going for it.

Animated PNG format: How does it compare to Animated WebP and GIF?