This little guy is the UE Wonderboom, the newest speaker in UE's product line. It's half as tall, and almost twice as fat as its more expensive and elegant big brother, the UE Boom 2. At $50 less, it's nearly as loud and sounds almost as good. The catch? It's missing a few of the features of its older siblings. However, if the missing features are ones you don't care about, it's a better bargain.

Anyone familiar with the UE line of speakers will instantly recognize the Wonderboom as a member of the family. The rubberized top and bottom, cloth-covered grill, and large volume buttons stitched into the fabric define it as a UE device. At the top of the device you'll find the power button, the Bluetooth pairing button, a small bungee loop, and the UE logo. 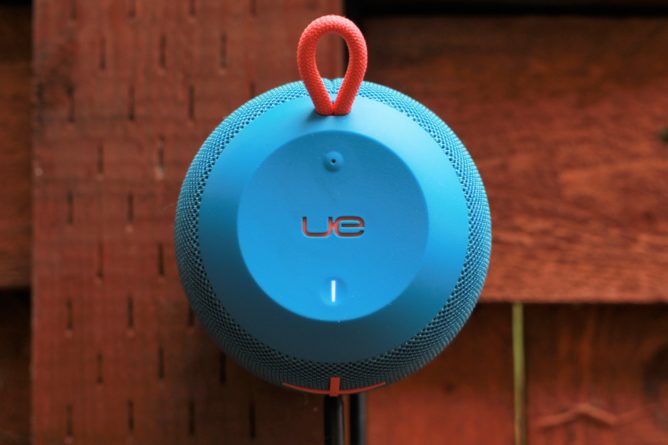 The logo serves as a multi-function button that pauses/plays music and skips tracks. Holding the button down for a moment will engage a special pairing mode for connecting another Wonderboom. Just engage the UE buttons down on the two speakers simultaneously and the two will pair in seconds. Once paired, the buttons on either speaker will control volume and playback settings on both. UE sent me two speakers to test this function, and it works like a charm. My only minor gripe is that the two speakers can't be set to stereo channels. 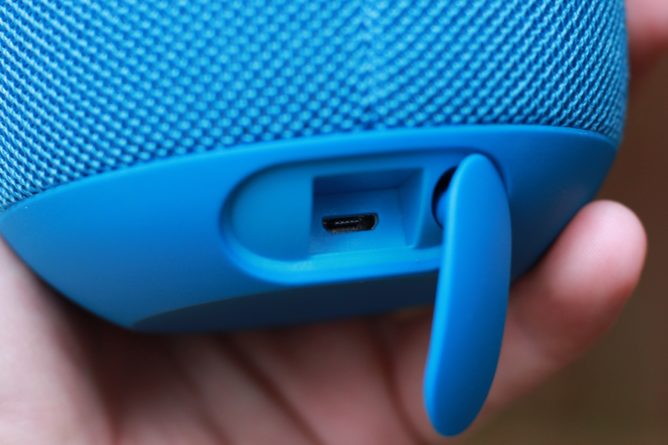 At the back of the device a rubber flap protects the MicroUSB charging input. There's no Aux-in port, so your only option for connecting to the device is Bluetooth. That's not the only feature missing on the Wonderboom. There's no microphone as well, so you can't take phone calls, or use Google Now voice commands. The pint size speaker also isn't compatible with UE's app, meaning you can't change the equalizer settings or update the firmware. Are the missing features deal breakers? Possibly for some, but I imagine a lot of consumers either won't care or notice that they are missing.

There may be a couple of things the Wonderboom can't do, but it does do one thing most other speakers can't. It floats! Yup, it's not just waterproof, it actually floats. It doesn't sound all that great playing music while it's bobbing in the water (I don't think it was designed to be used this way), but at least you don't have to worry about losing your speaker if it falls out of your party boat. 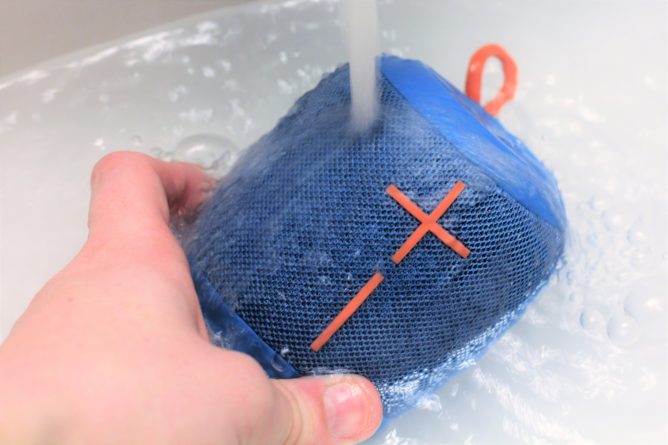 Sure, it's missing a few features, but what the Wonderboom does do, it does well. It has solid battery life with an estimated 10 hours of playback, it's rugged and drop-resistant from heights of up to five feet (I just couldn't bring myself to test that claim, it just looks so defenseless), and it has exceptional Bluetooth range.

That last feature is one that is oft-overlooked when picking a Bluetooth speaker, but it shouldn't be. UE's speakers are some of the only devices I have tested that continue to play music skip-free as I walk from room to room throughout my house with my phone in my pocket. The Wonderboom is no exception in this regard. UE seriously needs to give their antenna design team a bonus. 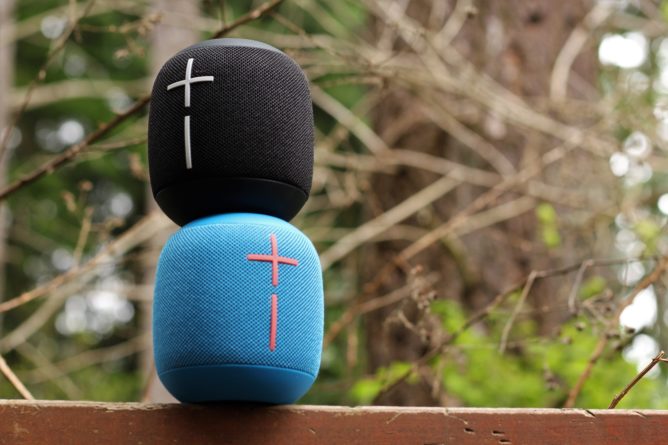 Now, all this is well and good, but if a speaker doesn't sound great, who cares about the feature list? I'm happy to report that the Wonderboom sounds very good for a speaker of this size and price. It punches above its weight in overall volume and bass performance as well. The speaker's treble range isn't quite as clear or as well-defined as the UE Boom 2, but it's more than adequate for blasting tunes during a backyard barbecue or pool party. As is common with speakers of this size, bass does tend to distort at higher volumes during particularly boomy tracks. Overall, it sounds great for what it is, a $100 ruggedized Bluetooth speaker.

The Wonderboom is available for purchase now on UE's site, or at Amazon for $99.99. It comes in six different color combinations that match its perky personality quite well. If you like its looks, and can live with its missing features, then it's a solid option to consider amongst portable Bluetooth speakers.