Everyone and their mother seems to be making a stationary home security camera these days, but there are also an increasing number of 360-degree cameras. These small motorized units might be a preferable option, depending on what you need to keep an eye on. I tested the Yi Dome Camera a few months ago and found it to be overall pretty neat, but perhaps a little gimmicky. Lately, I've been using the EZVIZ Mini 360 Plus, which is very similar to the Yi 360. It's a low-cost camera that can rotate to get a full 360-degree view of the room.

One of my favorite things about the Mini 360 Plus is the design. It's a small globe about 4-inches across with a flat bottom so it can remain stable on a table or shelf. You can also mount it to the ceiling via an included bracket. The video output can be flipped 180-degrees to compensate, but there's no other rotation option. That means placing it on a wall is not recommended. The housing has a two-tone color scheme—the top half with the lens is black, and the bottom is white. It looks slick. The top half of the camera is the part that rotates to give you a view of the room.

The setup process for the camera is one of the quickest I've seen, with only a few weird moments. I'm not overly pleased with the power cable, though. Most cameras have moved to a microUSB cable for power, but the Mini 360 Plus has a rather weird cable. It's a USB-A at the wall adapter end, but the other end is a DC jack. So, you'll have to run a new cable if you're replacing another camera with the Mini 360 Plus. There's also no battery like you'd find in more expensive cameras. Next to the power jack is a microSD card slot, which can be used to record all your video locally. Not all cameras support this, but I certainly appreciate those that do. 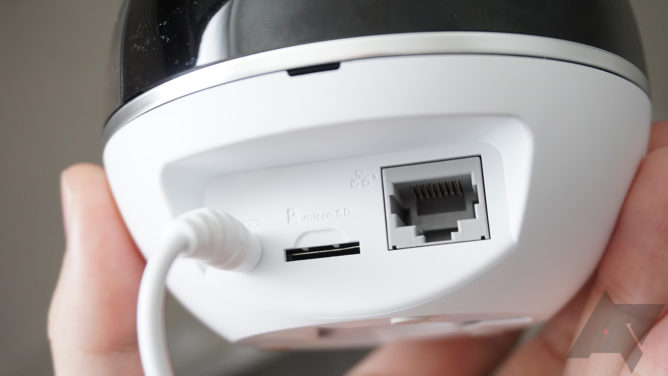 After powering up, you can install the EZVIZ app and create an account. I'll give EZVIZ points for supporting Google account login. After you have tied your accounts together, you can log into EZVIZ apps and services via Google. That's handy considering the app has a weird habit of logging me out. The only bump in the road during setup is the email code to confirm the account; mine took several minutes to show up.

The camera is added by scanning the QR code on the underside, and then you get to choose how you're connecting it to your network. It supports WiFi, but there's also an ethernet port, which is a nice extra you don't see on most home cameras. If you do WiFi (as most people will) you have to hold your phone within 2-inches of the camera, which is pretty weird. That's apparently necessary to push the WiFi credentials over to the camera. Be aware, if you use WiFi this camera only supports 2.4GHz.

This camera can pan and rotate all the way around, which is good because you'll need that to see an entire room. The Mini 360 Plus has a rather narrow 92-degree field of view. Even other rotating cameras like the Yi Dome Cam are wider than that. There's very little distortion at the edges of the frame, which is one upshot of the narrow FOV, I guess. 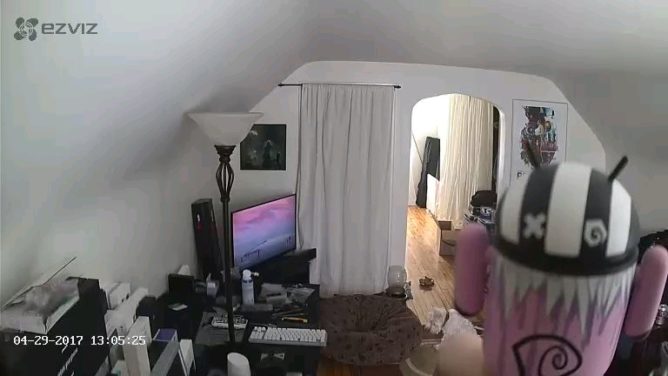 The image clarity is okay in 1080p video mode. I've seen better image quality from other cameras, and I'd probably say it's not worth using full HD mode on this camera considering the lower frame rate. It doesn't look considerably clearer—in fact, all the images look rather compressed. I will give the Mini 360 Plus high marks for night vision. It has a brighter IR light than most cameras, and it flips on quickly when the lights go out. 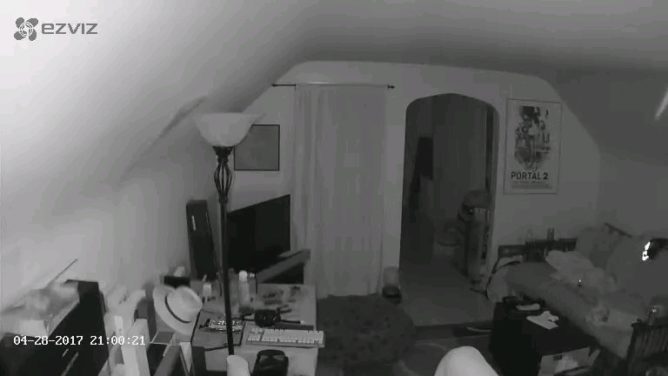 The camera's audio quality is similarly just okay. You can speak through the camera using your phone by pressing and holding the intercom button. Voices come through the speaker a bit crackly, but you can understand what's being said. The microphone gets the job done, but it too is crackly and not very loud.

The EZVIZ app can handle all the company's cameras, so you can manage the Mini 360 Plus along with the company's more conventional fixed cameras. The main screen shows you all the cameras you have connected to your account. Tapping on them goes to the control interface where you can view the feed larger and see the video history.

The app is responsive, but the design is generally confusing. Features are scattered around, and the camera controls are odd. For example, there are two different rows of controls under the feed, one of which is scrollable. There's no rhyme or reason to which buttons are where, and none of them are labeled. The bottom half of the screen provides quick access to the recorded clips and a timeline view. This part of the app actually works quite well.

Despite having a full 360-degree view of the room, you can't just take a 360-degree photo (as far as I can tell). The only place this functionality is supported is in the pan interface. The camera stitches together a panoramic photo, and then you tap on different areas to rotate the camera there. Alternatively, there's a trackpad-like interface for moving the camera. It works alright, but the delay after dragging makes it hard to get the camera pointed where you want.

One of my most serious concerns with this device is the relative lack of notification and recording options. There's no geofencing, SMS, or email. The camera saves every video for every movement in its field of view (there is sensitivity adjustment), and you can't use sound as a trigger at all. There is at least a scheduling feature that can disable notifications, although the video is still recorded. Additionally, it can't be set to pan around continuously. The only automatic movement you get is motion tracking, but you might miss something moving in the room with the narrow FOV and no automatic panning.

Like all the companies looking to sell you a home security camera, EZVIZ encourages you to sign up for a cloud storage subscription plan. $5 per month gets you 7-days of saved video, and $10 monthly is 30-days of storage. Unfortunately, there's no online storage at all if you don't pay for it. Many camera makers are at least offering a couple of days free, but here you have to rely on the microSD card.

I can't deny there are issues with the Mini 360 Plus—the image and sound quality are just okay, and the feature set is lacking. However, it has good night vision, attractive design, and a low price. 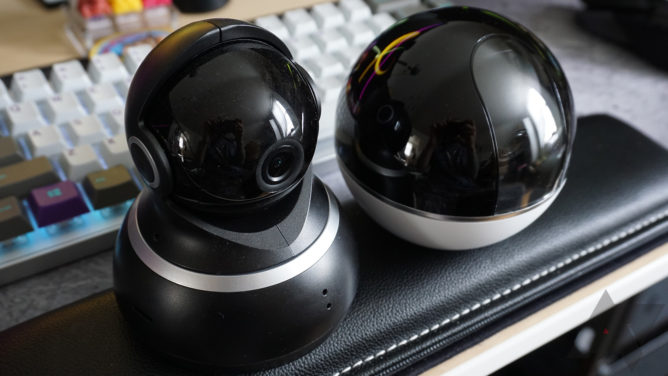 EZVIZ Mini 360 Plus with the Yi Dome Camera

At $80, this is one of the cheapest home security cameras available. Plus, it rotates. I just wish the app could take better advantage of the hardware. If you're looking for a budget camera, I think the Yi Dome Camera is a little better. However, you should spend more if you can. The "premium" camera systems have many more features.