I don't know why, but apparently every franchise out there just has to shoehorn its name onto a match-3 puzzle game. We get it, Candy Crush made a ton of money, but can we please move on from this tired genre already? Sadly, it would appear that Disney thinks not. In their latest attempt to cash in on the property they have released Star Wars: Puzzle Droids, a match-3 puzzle game.

It was only two days ago that I was lambasting Family Guy for the exact same same lazy attempt of releasing a match-3 puzzler. Yet here we are again. As you would expect, this contains all of the exact same trappings, it's just wrapped up in a Star Wars theme.

The gameplay revolves around matching colored shapes in order to clear a required amount in each of the game's levels. As you progress, you are slowly (and I mean slowly) introduced to all of the facets of play. It is around level five of the first world that it is revealed you will need to use power-ups in order to help get through some of the more difficult stages. Now guess which of the game's three currencies are required to purchase these needed power-ups. If you guessed the one that costs real money... winner, winner, chicken dinner.

Besides the boring gameplay, it is also worth mentioning that there is quite a lot of lag outside of each puzzle. When you are playing the match-3 portion of the game, things are perfectly fine. It is when you are navigating the rest of the title that you will see plenty of slowdown. Navigating from screen to screen is a slow and choppy experience. While there is a graphics setting in the menu that you can change, it in no way alleviates this issue. It is almost as if the lag has nothing to do with what type of graphics settings the game is using and is actually caused by the constant connections to a server. 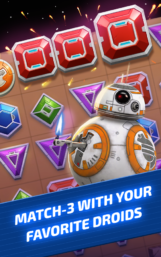 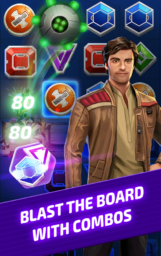 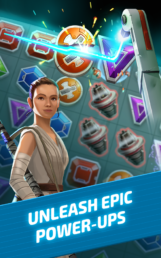 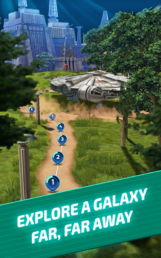 Really, the only thing that stands out for Star Wars: Puzzle Droids is its sound design. This is actually something that Disney got pretty right. Everything sounds spot on and it definitely gives a Star Wars vibe that should be familiar to any fan of the series. From the sound effects to the voice work, this is undoubtedly a Star Wars game.

There is also an interesting aspect where you go through the storyline of Star Wars: Episode VII - The Force Awakens through the memories of BB-8. You will even get to experience events that were not in the movie, further expanding your understanding of the overall storyline. For what is a lame excuse of a game, what you can glean from its story is actually somewhat intriguing. 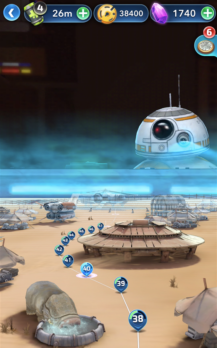 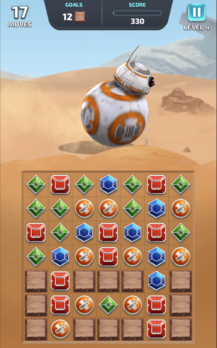 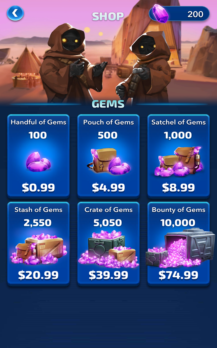 Just like the rest of the skinned match-3 games out there, Star Wars: Puzzle Droids contains advertisements and in-app purchases. These IAPs range up to $74.99 per item, which is actually a titch under what is normally present in a game such as this. So congratulations to Disney, I guess. There is also no support for Google Play Games. That means no leaderboard, no achievements, and definitely no cloud saving. Frankly, it is disheartening to see these Android-specific features constantly ignored by developers.

Overall, you would need to be a very big Star Wars fan to get any pleasure out of this release. Even if match-3 gameplay is your thing, the inevitable paywall just ruins any positive experience you could have with Star Wars: Puzzle Droids. 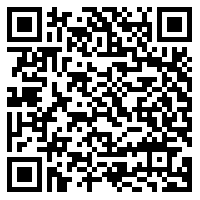 Google adds the Pixels to its end-of-life support page