I am sure everyone here remembers the game Draw Something. It was a Pictionary-like game released on Android in 2012 by the developer OMGPOP. For years I had wondered why Pictionary didn't cash in on the popularity Draw Something had capitalized on. Now I have to question whether it would have been best to leave well enough alone this late in the game. 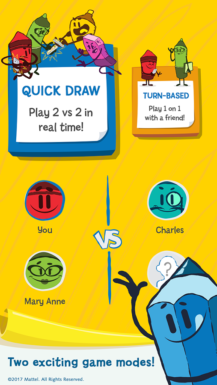 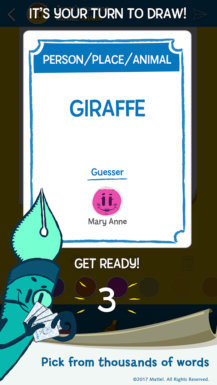 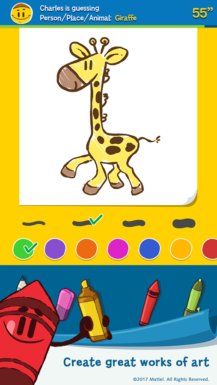 Now don't get me wrong, there is some fun to be had with Pictionary. I just don't see why they waited so long to release it. Didn't everyone get their fill of the gameplay back when they were playing Draw Something? Is there even room for another contender in this long forgotten franchise? I suppose only time will tell.

First, I'd like to start with what Pictionary has going right for it. As soon as you open the game you can sign in with either a Facebook or Google account. Both of these accounts will allow for cloud saving, which is great if you want to play on multiple devices. I can also appreciate that by having two different sign-in methods Pictionary will cover the majority of preferred ways to log into the game. Once you are signed in, you can jump into a match very easily by clicking on the new game button. So right off the bat, you can easily sign in and jump into the action without worry of ever losing any progress. That's not a bad way to introduce people to your game.

The gameplay is also pretty solid. You draw pictures of random words or phrases to the best of your ability in order to have your opponents guess the drawing's meaning. Much like the game Hangman or Wheel of Fortune, there will be blank spaces to alert you as to how many letters are needed to solve the puzzle. This makes it a lot easier to take your guess.

Everything can't be sunshine and roses though, so here come the downsides. When you click on the new game button you will see two choices of game modes. One is called turn-based and it is easily joined. The other is called quick draw, but for some reason it is grayed out. When you try to click on it you are told "the mode is currently unavailable in your language". This seems a bit odd to me, especially when you consider that today is the official release of the app. If it was not ready for an English market, why release it?

There is also a problem with the game's matchmaking. For a title that is centered around multiplayer gameplay, the built-in ability to play matches against your friends is obviously a core feature. The problem with this is that Pictionary will only search out your Facebook friends. As someone who signed into this Android game with their Google account, why are none of my Google contacts available for multiplayer? 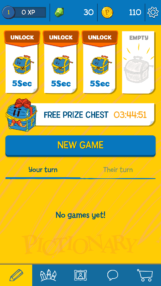 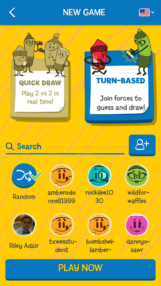 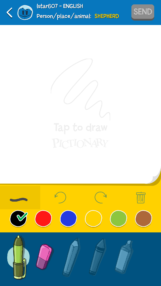 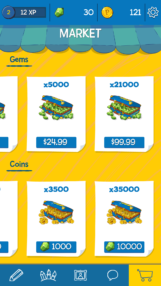 I also take issue with the way the game is monetized. There is a random crate system that allows you to unlock new drawing tools. I find this keeps things too random and pushes for the player to drop endless amounts of money. The double currency also makes it difficult to know exactly what anything costs. You purchase gems with real money to then purchase coins with the gems. These coins are then used to upgrade the tools you unlock with the crates. Oh, and did I mention that all of the crates have wait timers? Yep, the only way to avoid those is through the use of gems. As you can clearly see, Pictionary uses all of the familiar tricks in order to keep people paying.

Lastly, I would like to talk about the advertisements and in-app purchases. The ads are aggressive. You will see a full page ad after every round of play. Considering how fast rounds can go, you will see these ads quite often. Luckily Pictionary has provided a way around this. There is an ad-free variant available today for $2.99. I have to say that this is highly appreciated. Sadly the IAPs are still present in both versions of the game and they range up to $99.99 an item.

Overall Pictionary wasn't the worst drawing game I have played on Android. I am definitely not a fan of the crate system and how difficult it makes it to unlock needed tools and upgrades. But who am I kidding, this is a game that works best as a casual interest. If you play it in your downtime and just ignore the IAPs you might find something that is somewhat serviceable. Facebook is making Messenger Lite available in 132 more countries, but not the US