Remember those crazy expensive apps that only existed for you to show off how rich you are to your friends (and to make developers some quick cash from chumps)? The $999.99 'I Am Rich' iOS app from back in '08 comes to mind, but it turns out that those apps still exist on the Play Store. PENITAX, a Slovakia-based 'developer,' has just made all three of his lackluster $399.99 apps free for a limited time on the Play Store.

Let's take a closer look at these apps, one-by-one.

I am rich Premium

This is arguably the most hilarious app here, as it literally does nothing for that $399.99 you'd usually pay. (Yes, the other two apps actually have functions!) If you want to be "a rich" (the electronic music-filled video's words, not mine), this piece of gold will let you reach that goal. Interestingly, the video was uploaded today - maybe they're anticipating some widespread media coverage. Looks like we've fallen into the trap. Oh well.

As soon as you click on the hilariously generic icon, you're greeted with a picture of a man whom I do not recognize, as well as some 'I AM VERY RICH!!! I BOUGHT THIS APP FOR 350$' text. (Keep in mind that this app usually goes for $399.99, not $350.) This mystery baller is wearing a red polo shirt, a gold necklace, and a gold ring, all of which presumably demonstrate just how rich he is. The wrap he's holding and the digital watch don't hurt that image either. Plus, that stack of $100 bills stuck on top further gives the impression of wealth. 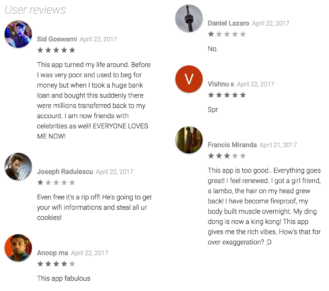 The developer kindly asks that we "review the app and give 5*." Unfortunately, not many people have done so.

Moving down, we get some more very well-formatted pictures of stacks of cash, and then a cool picture of our developer, who is sitting underneath a tree donning some sick shades. We also get photos of some "More Rich Bitches," who are probably the dev's BFFs. Mr. Csongor is posing for the camera in a very dope manner, and Mr. Zámbódzsimi (I think I spelled that right?) appears to be a muscular dude with a machine gun in hand. Have you ever seen a more dynamic trio?

In case you need to be reminded about what app you've been wasting the past five minutes staring at and what the developer's name is, it's all there at the bottom again. Also present are the version number of 1.1 (I wonder what 1.0 looked like) and an ad for a Facebook page, Magyar Tudósok (translates to 'Hungarian Scholars'), that has a not-terrible 19,286 likes. It appears to be some sort of religion/political/meme page with no relation to the app. Odd. 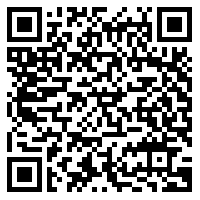 Have you ever wanted to play the classic helicopter game, but with a toilet? Well, Toilet Simulator is the app for you. The fact that this is the best app out of all three $399.99 apps is laughable, but it's true - it's an actual game that you can play.

In case you were wondering, stretching the app to 18.5:9 on the S8+ does nothing.

Essentially, you're a toilet who has to navigate through a narrowing cave (is it a gutter? I can't tell), all the while avoiding the plungers. It's harder than it seems - the toilet requires considerably more taps to maintain in the air than the helicopter does, and the music in the background is rather distracting. I've gotten to about 2000. Unfortunately, I don't know precisely what my high score is, as the game automatically restarts after you hit something and there's no high score menu.

It seems that the developer is having some sort of identity crisis, as he calls himself "Krenowels" in this app's main menu. Or maybe he's trying to spread the blame for the poorly made, absurdly expensive apps to two people? Who knows. Was Toilet Simulator just not good enough? Did you feel inadequate because you didn't have a 'PRO' version? Good news! Toilet Simulator PRO has also been discounted from $399.99 to $free.99. Unfortunately, it's more 'I am rich Premium' than 'Toilet Simulator.'

Follow the 'PRESS THE TOILET' instructions and click on the generic toilet picture, and you get... a soundtrack of a toilet flushing. I guess it's better than a fart noise, which is what I was expecting here. At least there aren't any ads, right?

PENITAX / Team Krenowels is having another identity crisis here. Hit the link to their site, and you find out that it no longer exists (if it ever did). Their YouTube channel is intact, though. We also get that same menu button from 'I am rich Premium,' with the same 'Stop this application' option and the same credits to MIT App Inventor. 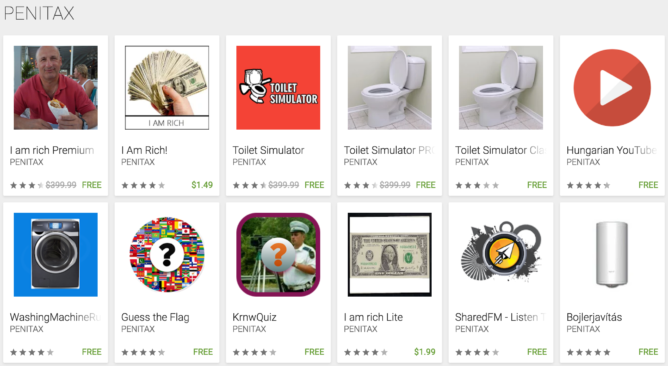 Judging from PENITAX's Play Store page, the rest of their apps aren't much better. They're a mix between more give-me-money apps, some quizzes, some appliance simulators, and a few others. But if you're in the market for some severely discounted apps, regardless of their quality, these are probably worth checking out. It's pretty hard to beat $400/100% off.

Sonos Playbase review: The speaker to rule the living room