The two phones may not have even come out until today, but T-Mobile and Verizon have been on their toes. The Galaxy S8 and S8+ on everyone's favorite red and magenta networks have already been updated. T-Mobile is a bit scant on details, but Verizon has obliged with plenty of their own. Either way, the timely frequency of updates thus far bodes well for the future of the device.

T-Mobile's notice for the update landed yesterday (note, before the phone was officially released) and Verizon's hit today. Neither looks like it's got any big changes, though. T-mobile's update has resulted in some time-traveling humor, since the release dates of the different builds on T-Mobile's site now progress backwards. Their log shows the new software is still just Android 7.0 Nougat, but it does also feature an updated Baseband as well as a number of "various system improvements." Really, we don't know what's changed or been improved. However, with the baseband being different, and taking into account the importance of the correct operation of a radio in a phone, you'll want to make sure you pull it down. 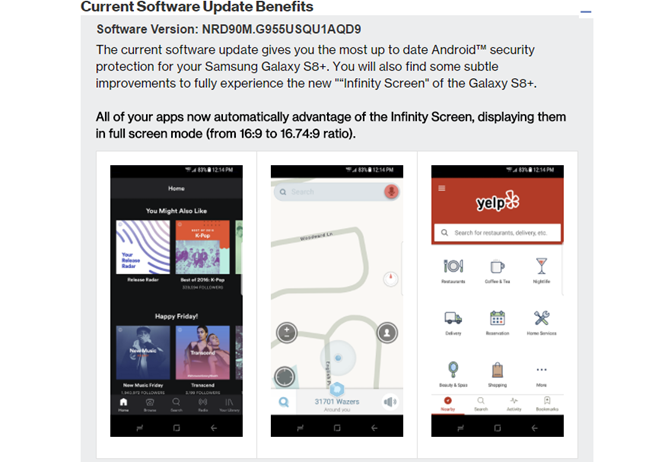 The Verizon log, on the other hand, is picture-packed and verbose. It has the same baseband update, but also describes other changes to make better use of the Infinity Screen, answer calls with the volume-down key, and some notification badge color tweaks. For Verizon's full list of changes feel free to check down below.

It's possible that this is the update that disabled Bixby, but without a prior build to compare it with we can't be sure. Give it time and the saints at XDA might have another fix short of root. But in the meantime...

We're seeing an OTA live for our AT&T model as well.

Synology DiskStation DS416play review: Cloud who? Personal servers can be cool and ...