I am not an on-ear headphones person so it's difficult for me to review them objectively without saying how much I dislike the idea and pressure they exert on my ears. Oddly, that's not the case with the BackBeat 500, the newest release from Plantronics. I don't hate them and I can manage wearing them for a couple of hours without wanting to rip them off my head. That's a good start.

I've reviewed many of the brand's headphones over the years including the in-ear BackBeat GO 3 and the big over-ear BackBeat Pro+ and Pro 2, and I've spent some time with the on-ear BackBeat Sense, so I do know what to expect: better value for the money than most brands, good sound quality, and nice design and build. The BackBeat 500 fit right in with that trend so let's take a more in-depth look at them.

I rarely notice and even more rarely get annoyed by branding on products, even if they're on the face of a smartwatch, but the BackBeat 500 surprised me and not in a positive way. The headset has so much product branding that you start wondering if its affordable price is subsidized by the free publicity you do while wearing it. The word Plantronics is on the bottom of both sides of the headband, the acronym PLT is in big on the top of the headband and the face of the right ear cup, and there's an orange fabric sticking out of the headband with PLT on one side and Plantronics on the other. That's too much, seriously. I'm not even counting the Plantronics on the inside of the headband with the IC certification and model plus serial number. 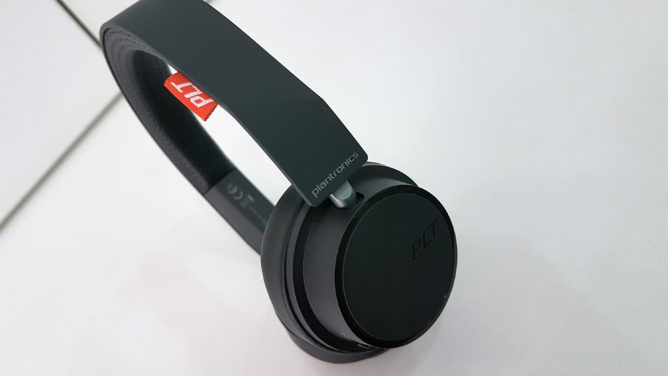 Above: "PLT" orange fabric, white "Plantronics" on the headband, black "PLT" on the earcup.

Below: Large black "PLT" and small white "Plantronics" on the headband. 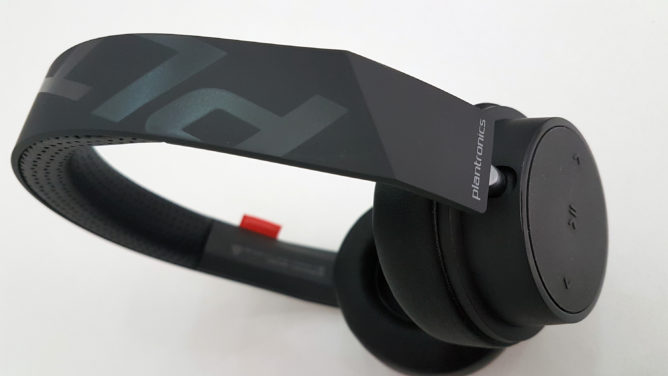 Most of these are subtle and I probably would have found they added flair to the headset (I especially like the large PLT on the top of the headband), if it weren't for the orange fabric sticking out like a cheap clothing tag. That's the one that tipped me over the edge and got me to see all the others in a worse light. 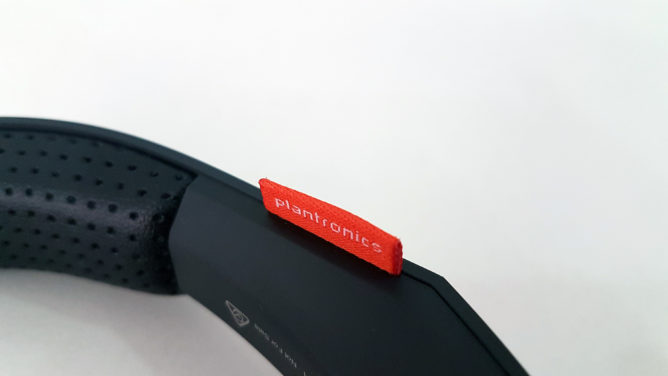 It's not traditional for me to start a review with a negative point, but in this case I had to because some users will be irked by the overzealous branding and thus never ever consider the BackBeat 500. For those who aren't bothered by it or who can grow to ignore it (like me), then these are very nice on-ear headphones and try as I might, I couldn't really fault them at anything else for the price.

The BackBeat 500 is solidly built with thick mostly matte plastic, soft faux-leather, and clean finishes. It looks clean too, especially in the dark grey and black color that I have. There's a bright white and light grey version and another dark grey and green one that is super cool. In almost all-black though, the headset appears understated. The most remarkable thing about it are the sharp angles that the headband takes when curving toward the earcup, and even those aren't that distinguishable. 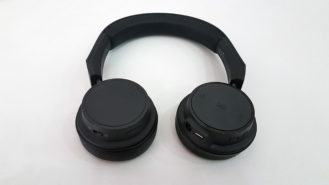 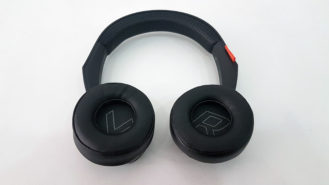 Despite the two sharp edges on the headband, the design is very understated.

Being an on-ear headset, the earcups are tiny and the overall size and weight is considerably reduced compared to over-ear sets like the Bose QC35 pictured below for comparison. 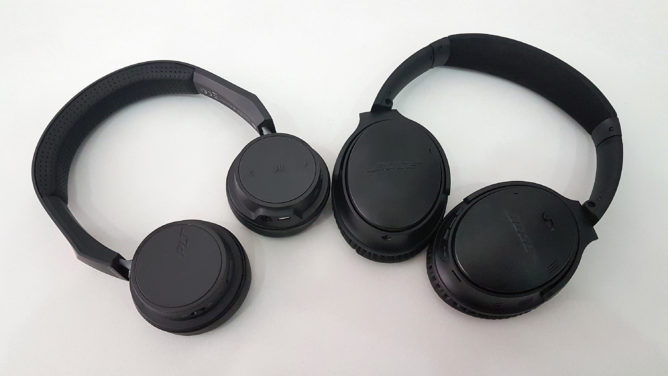 The right earcup houses the Power + Bluetooth toggle that turns the 500 off, on, and puts them into pairing mode. There's a small LED light nearby that momentarily switches to blue when they're on and red when they're off, and hops between both when pairing. And there's a large call button that can redial with a double click or launch Google Assistant (or OK Google) with a long click. 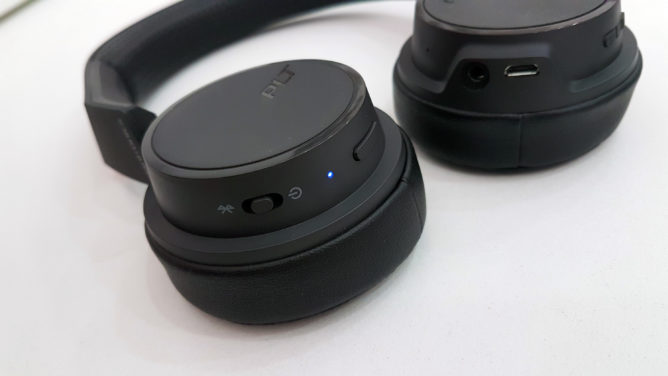 The controls and ports are on the left earcup: MicroUSB for charging, 3.5mm for wired listening, Volume up and down, and Play/Pause, skip, and rewind. 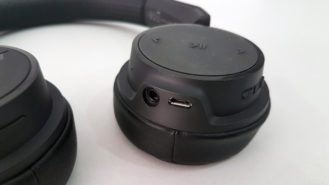 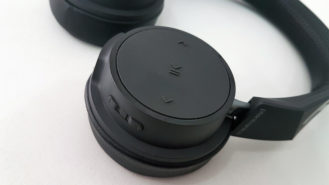 The buttons and switches are all very clicky and the playback controls are easy to feel thanks to their embossed symbols. When other and more expensive headsets skimp on buttons and double the volume controls as skip and rewind, it's nice to see they are separate here, resulting in less confusion and simpler usage.

For a pair of on-ear headphones, the BackBeat 500 are surprisingly comfortable to wear. I've been able to keep them on for a couple of hours without wanting to rip them off my head, which is a change from many other sets I've tried before; even Plantronics' own Sense was too annoying for me to keep for more than 10-15 minutes.

At 155g, these are very light and thanks to the memory foam on the inside of the headband and the earcups, they sit softly on your head and ears. The headband is flexible and not too tight so it doesn't exert too much pressure on your head while you're wearing it. And as with any headphones, you can extend the headband by several levels on each side to adjust to the size of your head. I found the mechanism very solid and once it sets on a level, it doesn't budge unless you exert enough pressure on it. 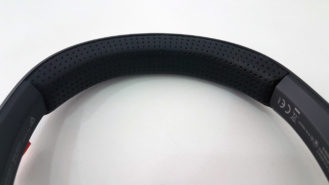 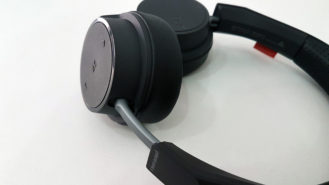 Beside being comfortable to wear, the BackBeat 500 up their usability thanks to two features. One, Multipoint Bluetooth lets me connect them to my phone and my iMac at the same time, so I can enjoy music from the desktop and take phone calls without having to take off the headset. Two, the long battery life and standby capability mean that I don't have to charge them often and I don't even have to worry about leaving them unadvertentyly on. As an anecdotal case, I left the BackBeat 500 with the toggle on for an entire weekend at work and when I came back on Monday, I thought I'd have to charge them to be able to test them. Turns out they had kicked into standby mode and hadn't lost any significant amount of battery. Sweet!

Compared to Plantronics' other headphones that I've reviewed, these have the least options. There's no sensor to automatically pause and resume playback when you put them on, no NFC for easy pairing, and no OpenMic to hear your surroundings with a quick click without pausing the music. If corners had to be cut to keep the price down, those were the right ones to ditch. They're very cool features, but not essential ones.

I wasn't expecting much from an $80 pair of on-ear headphones, but like many of Plantronics' other models, they pack a lot of bang for your buck. Although the on-ear design typically shouldn't seal the earcups tightly, causing sound to escape in and out, that's not the case here. With the music near 80% volume, my friend sitting near me can't hear a thing. And at an even lower 50-60% volume, I feel outside noise and speech being relatively blocked from reaching me. Okay so we're nowhere near real noise cancelation and zero sound leak, but it's pretty darn impressive for a small on-ear headset.

I'm sure the memory foam around the earcups plays a significant role in reducing leakage, even if they're just resting on your ear and not around it, and having the same 40mm dynamic drivers as the BackBeat Pro 2 helps with the quality of the sound.

Speaking of, the sound is warm, rather balanced, with a slightly heavier preference for bass, though without too much sacrifice on the mids and highs. The lows and highs at the beginning of Loic Nottet's Rythm Inside resonate accurately even at the highest volume and when vocals are added to the mix, there's no muddying and a great surrounding feel from the music. You get the same clarity and engulfing sound in Imagine Dragons' Believer and Fall Out Boy's Centuries. And you can sharply hear the notes ring at the beginning of Occidentali's Karma while still enjoying the subtleties of Francesco Gabbani's raspy voice on top.

The heavier focus on bass won't be obvious all the time, but it's there. The beats in The Weeknd's Starboy feel a little more overpowering compared to the rest of the music, but I'm pretty sure this is exactly what anyone hearing that song expects.

I have one picky thing to point out though. Rock/Pop tracks with clear background music and average rhythms where there's less chance of overlapping notes play well, but I found faster and heavier rock tracks to be more confusing on the BackBeat 500. When the chorus kicks in in Three Days Grace's I Am Machine, I kept feeling like everything was being more jumbled than I'd like, and the same happened with Halestorm's I Miss The Misery and Minus-One's Cold. It's a small annoyance but those with fast and heavy rock preferences might want to look elsewhere. However, I keep telling myself that anyone picky enough to notice this wouldn't and shouldn't be looking at an $80 pair of on-ear headphones, so that's why I didn't even point this out in the negatives at the top of the review.

When all is said and done, the sound you're getting here is more immersive and powerful than you'd expect with little distortion and just a bit more focus on bass. If your tastes veer toward pop, electronic, RnB, latin, and the more subtle rock songs, then you're in the clear.

If you can't afford the larger, more powerful, and more comfortable over-ear headphones, the market for on-ear headphones will drown you with dozens upon dozens of options. But the BackBeat 500 comes in as a heavy contender in the category, packing as much oomph as it can for the price. 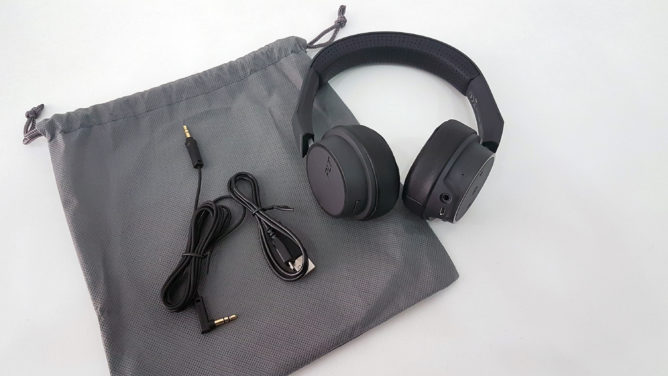 Solid build, clean finishes, comfortable wear, and great battery life make this one of the most attractive options you can consider, if you can look past all the branding on the headset. The sound quality, good seal, and little sound leak, are where the BackBeat 500 shines. For $80, you're getting what you pay for and even some.

Google Assistant's screen search has been moved to a button