Amazon has knocked $100 off the price of the black stainless Huawei Watch today, bringing it down to $250. Those looking for an entry into the world of Android Wear devices could do a lot worse.

Just the launch price of the leather-equipped models was $350, so to pick up one of the more expensive metal-banded units at this price is a decent deal, and since it was $350 at Amazon just a few days ago that represents a 28% savings. It's not quite as cheap as one of the other leather styles has been for brief moments recently, but if you're interested in a metal band the first-party ones do match pretty nicely. 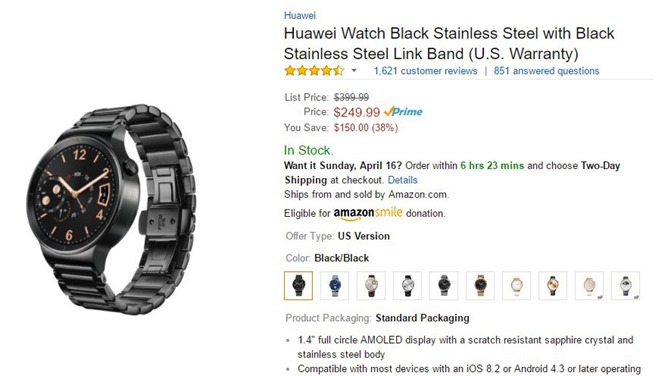 We noted in our review of the device that it was pretty snazzy. It's got a good design, sapphire AMOLED display, standard specs, and a heart-rate monitor. If the newer model doesn't quite appeal to your aesthetic sensibilities and you're after a round display in a simple package, then the Huawei Watch is probably near the top of your list anyway.

The device is slated to receive Android Wear 2.0 at some point in the future. Although it was rumored for a short time to have NFC support that is emphatically not the case, so keep in mind that it won't have support for Android Pay as other newer devices with NFC do. Nonetheless, if you want a nice understated but nearly-fully-featured Android Wear device at a decent price, this is a good option.

[Update: Moto G5 too] Motorola releases the kernel source code for the Moto G5 Plus