My background is a bit different than the other authors on Android Police, so this introductory post is going to have to be a bit different, too. To begin with, I'm not a real nerd like some of my AP compatriots.

I'm not a programmer in a personal or professional capacity. My skill at it is rudimentary, a python-level script-kiddie at best. I'm not scared of Bash or CMD, but I don't make apps, I don't make ROMs, and I don't do web development. My preferred stack is pancakes (with peanut butter). I'm one of those users.

I'm a professional amateur: a factotum. I started a company, and I'm working on another one. I've done editing and reviews for a small press, and I was a hand in a hot-rod shop. I've built robots, and I was a self-proclaimed Season 3 Grand Champion (don't believe my salty Rising Star lies). My hobby is the collecting of hobbies. I am into, or have been into, almost everything. I do leatherworking, play bad music, write bad sci-fi, flash ROMs, support open source development, and read obsessively — mostly literary fiction and trashy sci-fi.

I like Android. I like the direction its design has taken from Ice Cream Sandwich on, and I like the transparency of it from a user perspective as well as the open nature of the platform (when manufacturers adhere to the GPL). Most of all, I like that Android makes my device mine, not just through customization, but through the sense of ownership that comes from being able to change anything about it, if I wanted. Like a car I can modify if I want to, or a house I can expand and build, my device belongs to me.

In more tech-related self-absorption I can't in good faith provide you with a list of my current devices. I change between whatever I have on-hand too quickly to provide an accurate snapshot; whether due to nostalgia or need I'm technologically quite capricious. In general I use GNU/Linux, Windows, OSX, ChromeOS, and (of course) Android. In the world of Android and wearable devices I've had the G Watch Urbane, the OG Pebble, Pebble Time Steel, the OnePlus One, every Nexus phone and tablet but the 9 since the Galaxy Nexus, and others among a list too large to count.

Right now, though, I've escaped my shoebox apartment in the city to go to the park. I'm just wearing a regular 'ol dumbwatch, leaning back against a tree, and writing this love-letter to narcissism on an XPS 13 9343 while riding the data connection off my OP3. 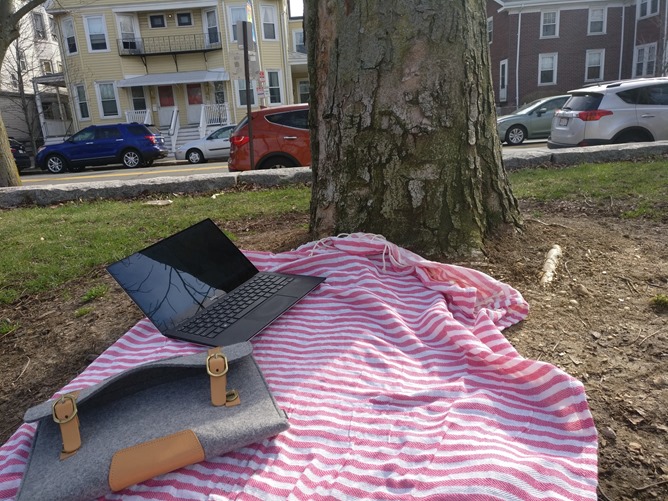 It's pretty beautiful outside today. I think I'll write one more from here.