The Google app went through a major version bump to 7.0 and began rolling out to the beta channel a couple of days ago. A bit of digging around turned up a few new settings, but nothing that explains why the version number went up on this release. Along with the new features, a teardown also raises some light on a few things we can look forward to in the future, including some vital improvements for Services accessed through Google Assistant and what may be a new type of device. If you're not part of the beta channel, you can grab the latest version of the Google app – now with fewer crashes – from APK Mirror.

Notification toggle was removed in a subsequent update

It looks like this toggle was revealed a bit prematurely. With the release of a minor update to v7.0.08, the Notification toggles have been removed. That probably explains why they didn't seem to do anything. At this point, this section might belong in the teardown because the setting will probably return in the future. – Thanks, Kfir Sadeh.

Google is working hard to make Assistant more useful and appealing to users, and that often means it will have to behave a little differently from one user to the next. Not only that, but it probably has to behave a little differently from one device to another, especially when they come in different form factors. The latest Google app update brings a little more configurability with a new setting for Assistant that allows users to toggle notifications on or off for their phones and Google Home devices. Here's the description:

Receive notifications like weather updates on this device. Even if notifications are off, you'll still hear alarms and important updates.

By default, the setting will be enabled on phones and disabled on Google Home. If you would like to change the setting, just go into the Google app Settings screen and then tap into the Assistant settings. You can switch between the Phone settings and Google Home with the dropdown at the top of the page, and then switch between Home units with another selector further down the page. 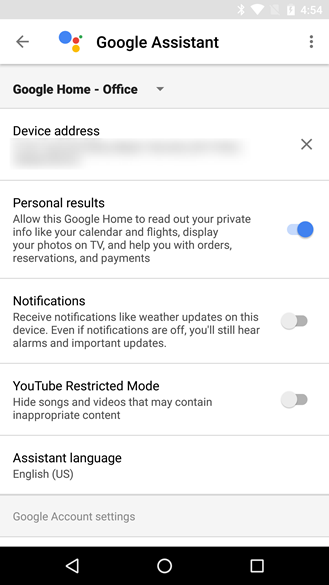 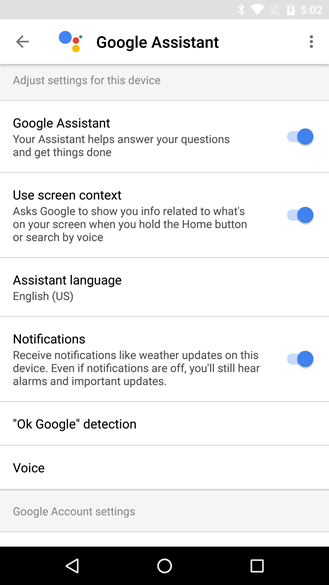 It's safe to assume that this refers to those low-priority items that silently slip into the notification list with current weather conditions, due dates for bills, and occasionally some important local news. At least that's how they usually present themselves on a phone.

Google Home might be a different story, and that might make this a little more interesting. So far, Assistant on Google Home has only been known to become active when an alarm goes off or somebody interacts with it directly through voice commands or casting. The rest of the time, it stays quiet. Enabling this setting would seem to suggest that it could now (or soon) wake up from time to time to let you know it started raining outside or that the mayor of a nearby town was arrested for some pretty nasty things. (True story.)

I've had the setting enabled for several hours on my Google Home, but there haven't been any notifications read aloud to me yet. I don't know if there just haven't been any events or if this isn't really supposed to be doing anything (yet).

Prevent icons from being added with new app installs 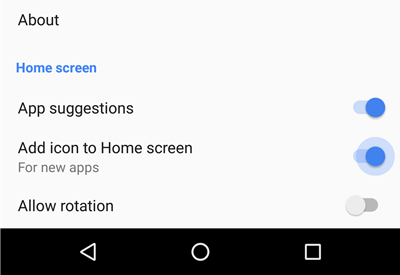 A couple of weeks ago, a teardown turned up a new setting destined for Google's launcher. Its purpose was to simply turn off the behavior that created icons on the home screen for freshly installed apps. That toggle is now live in the v7.0 update, but with a weird catch: It only works on Android O, or API 26, to be specific. Only users running a developer preview will be able to see the toggle for now.

Readers of the teardown rightly brought up the point that the Play Store offers a similar setting. However, that toggle only applies to apps installed through the Play Store, not to those from other sources like the Amazon Appstore. Perhaps this is related to–or inspired by–the change in the way unfamiliar app installers are handled in Android O.

Bug fix: No more crashing from swiping away cards 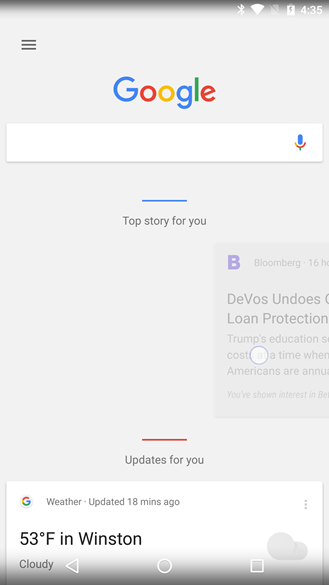 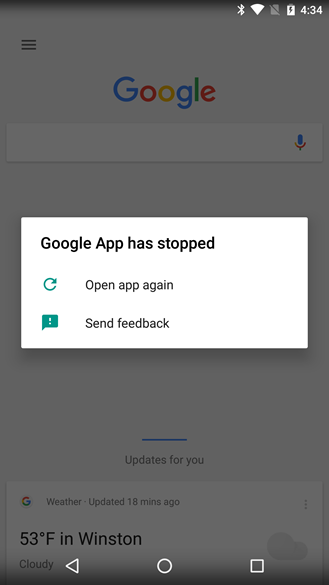 If you installed v7.0.4 of the Google app and ventured into your Now stream, there's a pretty good chance you also tried to swipe away a card and witnessed the scene above. Yes, there was a bug in that release and it had the undesirable effect of crashing the home screen. Version 7.0.6, which is linked below, fixes the issue.

Services are going to be easier to manage

After Google opened the gates for developers to build services for Assistant, there was a predictable flood of submissions attempting to get the attention of users. We're now staring at an unwieldy, disorganized list that's pretty hard to keep up to date with. Naturally, Google is moving to solve this by adding a few tools to make all of these services a little easier to sift through and use.

First, services (referred to as "agents" by Google's developers) will be sorted into categories so you won't have to stumble through a list containing everything from food delivery services to games.

If you're still having trouble finding the service you want, you'll also be able to ask Assistant to help out.

Once you're using a service and find that it's really good (or bad), you'll be able to give your feelings about it with a rating, feedback, or even report it if something is really not right about it. Ratings will obviously also be reflected in the directory of services so everybody will be able to ignore the ones that didn't live up to other peoples' standards.

Once you've chosen a few services that you like, you'll be able to add them to a personalized list. The term 'shortcut' is also used a few times and might be a way for users to attach their own custom names to services, and maybe even fill in some of the information for regular requests.

Most of this is pretty predictable stuff and was bound to happen eventually, and perhaps it should have been done a bit earlier. Nevertheless, as the infrastructure improves, so does the ecosystem.

Every once in a while, something really unusual comes up in a teardown... This is one of those times. There's a new device type listed among the strings in this update, and they refer to something known internally as "Bisto." This obviously has nothing to do with the British brand of foods, but instead refers to a device that is somehow distinct from other current products.

The list of device types above shows that Bisto is going to be treated differently from Android TV, Google Home, Android Wear, a Google Pixel, and the general category of "phone." Of course, since this list already makes a distinction between the Pixel and a regular phone, we can't eliminate the possibility Bisto is another phone or a special release matching one of the other products.

The current manifestation involving Bisto is a single toggle that offers to read notifications aloud to the user through headphones. This means the product can at least support headphones, which only really eliminates Android Auto and other in-car products – many states and countries don't allow drivers to wear headphones.

Since these are settings for Assistant, the final assertion we can make is that the device will obviously include Google Assistant. From that, we can also assume it will have a microphone and probably a speaker. Okay, those aren't strictly sure things, but the odds are in our favor.

There's a possibility Bisto also includes a screen, but that's not nearly as certain. Reading notifications is optional, which implies there may be another way to present them, though it could also mean they simply aren't delivered at all.

Unfortunately, that's about as far as the clues take us. Bisto probably has more in common with a phone than Google Home, and it's probably not going to have much to do with vehicles. Bisto might be an entirely new category of hardware, a specially branded device from an existing category, or even just the name used internally for Android One devices with Google Assistant. There's no denying that the clues line up well for a possible successor to Google Glass. It's too early to speculate much beyond that, but we'll definitely be on the lookout for more hints.