GAMEVIL Inc. has seen fit to retire their MLB Perfect Inning 16 game in order to replace it with MLB Perfect Inning Live. This means that any and all purchases that were put into PI 16 are now completely defunct. As you can imagine many players of the game who spent the last year (or more as the series has systematically carried over since the release of PI 14) building their teams by spending their time and money on the game are pretty irate.

It is Gamevil's claim that they needed to "move forward with a brand-new game" as too many changes were made in the development of PI Live from PI 16. This has resulted in no one's previous content carrying over to the new release. Gamevil has acknowledged this issue by allowing players to earn special benefits for PI Live from their PI 16 rosters. The consensus seems to be that this was nowhere near enough compensation. Ratings on the Play Store as well as comments on Gamevil's forums are not being very kind.

It would seem this user was discouraged by Gamevil selling IAPs for their PI 16 game without warning players in the game that they will soon be deemed useless when it is pulled from the Play Store. 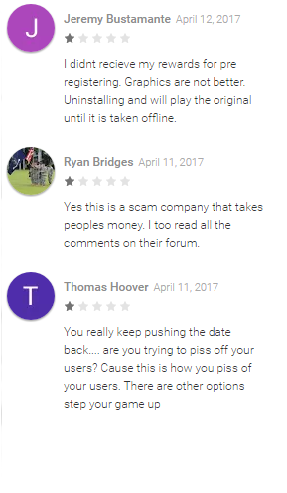 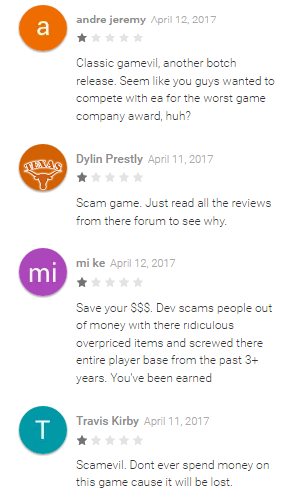 These Google Play Store users appear to be on the same page in their thinking that Gamevil is purposefully giving no way to carry over user content. Whether this was a move of pure greed on Gamevil's part or just the actual limitations in PI Live's development, we will probably never know for sure.

Despite the issue of lost content with the move to a new game MLB Perfect Inning Live is out now for everyone to play. If you are not familiar with the franchise this is a fully licensed MLB title that contains just about anything you would want in a baseball game. You can manage your team, each of your players, as well as trade to your heart's desire. The combination of these gameplay mechanics allows you to build out your ultimate team. There is also the new addition of real-time PvP which allows you to battle it out with your friends and random internet strangers.

Having spent some time with this release there are sadly a few issues that I think are worth pointing out. First off, there is quite a lot of lag. Lag navigating the menus and lag playing the game. Often I would find that I didn't even see the animations of a pitcher or batter. This pretty much ruins the gameplay as you need these visual cues in order to succeed. The constant server connections thrown at you when opening or restarting the game are most likely the clue as to what is the real culprit for the experienced lag. I also had a real problem with connecting to their server in the first place as I needed to download the 639.25mb resource file before I could even play. The download kept timing out on me. Hopefully, once we are out of the release window the lag and overall server issues will subside.

It is also pretty clear that all of the trappings of a free-to-play title are included. There are advertisements in the game as well as in-app purchases. The IAPs can be used to purchase different collections of items called packages, which range up to $49.99. They can also be used to purchase one of the in-game currencies of diamonds which are priced up to $99.99 and can be used for consumables, equipment, and player drafts. But diamonds are not the only currency included in the title. You can also earn gold and mileage through simply playing the game. As you would expect, these two currencies you are earning through gameplay will not be as useful as the diamonds you can purchase with your cold hard cash.

If you completely ignore the controversy of no one's purchases being carried over there are still a few issues for Gamevil to work out in order to make this a serviceable and fun game. I am sure they will pull it out of the bag as they always seem to do. If you are a baseball fan there is actually a lot to enjoy with MLB Perfect Inning Live but there is also a lot of shadiness surrounding it and the developer. To me this makes it seem like a questionable venture if you are going to be spending your time and money on the game. Gamevil has reached out. Here is some background information on the post.

Gamevil turned off the ability to purchase in-app purchases for MLB Perfect Inning 16 on 03/09/17. The app itself was removed from the Play Store on 04/11/17. On 06/11/17 the game's servers will be turned off. This means that it will still run for those who still have the app installed, you just can not make any purchases for its IAPs.

A representative from Gamevil that reached out to Android Police would like to make clear that they did not retire MLB '16 yet and that the servers will still be running until 6/11. Also, the reason for the inability to migrate player data is because MLB Perfect Inning Live is fundamentally a new game with a new engine. They also want to make clear that they did not do this because of greed or any reason like that.

The HTC One M9 on Sprint is getting its Nougat update [Update: RUU available]