Google's Android beta program allows the more intrepid among you to take a first crack at new updates, but it can be a little irksome to then move to the final build. For example, the 7.1.2 testers are still running the beta while the final version has rolled out to non-testers. Now, it looks like Google has started updating the beta build to final, but only for the Nexus 6P so far.

The update clocks in at a mere 25.4MB, which isn't surprising. You're only going from 7.1.2 to a slightly different 7.1.2. The build number when all's said and done will be N2G47H. That's the same build that rolled out to non-testers. There should not be any feature differences between the two versions, but being on the right build means you'll be able to get OTA updates going forward. 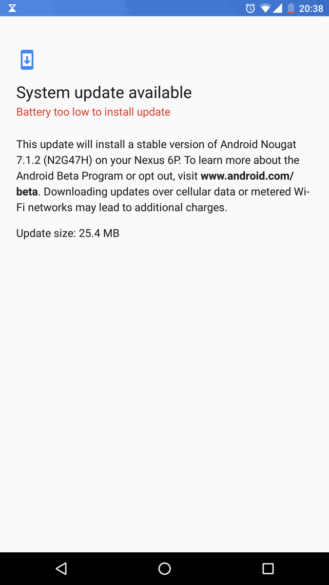 We don't yet know if this is rolling out to everyone, but check your update menu to be safe. If it's not there, we've got the URL of the OTA on Google's servers. Feel free to sideload it if you can't wait, but remember this is only for the 6P. Hopefully other devices on the beta get updates soon.

We got numerous reports earlier that phones were being offered another update to the beta build after installing the final one. Google neglected to flip some switch on its end to prevent phones from getting the beta OTA again, but that should be fixed now.