There's nothing like adding great new features with an update. The latest version of Photos began its rollout yesterday and it enables a video stabilization feature we've been looking forward to for months. A teardown of the apk also raises the question: Would the Photos app ever find itself reintegrating Google+ in some way? If you're not in the mood to wait for this version to hit your device, hit the APK Mirror link at the bottom to get this update a bit early.

Back in August of last year, the Photos v1.25 update revealed Google was working to add video stabilization to Photos, followed shortly by another update that made it obvious the stabilization would happen locally on a given device. It may have taken a little while, but stabilization is now live! 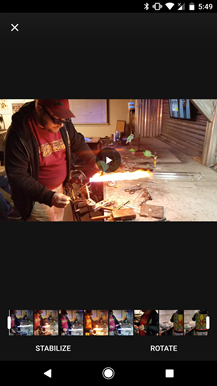 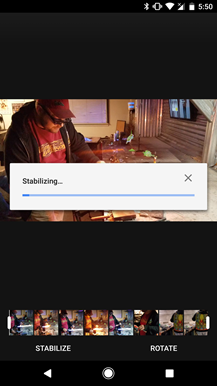 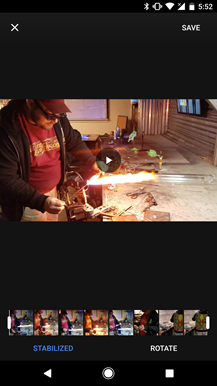 To stabilize a video, just open it in the viewer and tap the pen icon to edit it. If the video isn't already locally stored on your device, it will be downloaded. Once you're in the editor, the Stabilize button can be found at the bottom left. When you tap on it, a progress bar pops up to show how far along the process is.

Several factors will play into how long it takes for a video to process. I waited about 16 seconds to stabilize a 19-second 1920x1080 (30fps) clip on my Pixel, but it could take more or less time depending on the video duration, resolution, framerate, and the processing power of the device.

When the processing is finished, you can watch the stabilized video. Notice that the Stabilize button is now blue to show that the effect is active. You can toggle it on and off to compare the results. Since this is electronic stabilization, there will naturally be some cropping of the video, but the results seem fairly good.

The return of Google+?

Assuming you've been using a smartphone for a couple of years, you may remember there was a time when Google's cloud storage solution for photos was provided by Google+. That was before Photos was split off into a separate service and app. (2015 seems so long ago.)

While it has been trendy to take shots at Google+ for a low(-ish) user count and having some of its features unceremoniously lopped off to create entirely separate products, some users have lamented the loss of sharing photo albums through Google+ Circles. It can still be done easily, but there are some ways it could be improved. There's also no good way to follow just the photo-centric posts from people or whole circles. Well, that might be changing.

The latest version of the Photos app includes new text plucked directly from the Google+ app. The lines describe a few familiar activities like creating circles, adding people to them, and following people and pages.

<string name="one_click_change_circles_toast_message">When you first follow someone, you can touch and hold “Follow” to choose a circle other than %1$s.</string>

Unfortunately, there are a couple of reasons I'm skeptical about what this could be. To begin with, the text isn't just a copy of the lines from Google+, the string names actually match up perfectly. My second concern is that none of the text actually refers to a photo-specific feature, only circle management and the broad concept of sharing. In other words, there's no sign that there's any actual work to add a feature directly related to Google+.

Even if a wider variety of sharing methods isn't on the table, there is another viable explanation: SendKit might be adding support for Google+ contacts. This probably requires a little quick explanation. Last year, an update to the Photos app included a line teasing "faster sharing" which was later shown to be a feature of a library called SendKit. When the feature launched, it turned out to be just an in-app list of your contacts that you could share to via email or SMS. It's possible this integration might allow the app to include your G+ contacts and circles in the list.

There's definitely room to doubt the clues since the lines could have been added unintentionally with an included library or some piece of shared code. On the other hand, these strings probably wouldn't be here if there wasn't something happening.

Every once in a while, the developers at Google decide to have a little fun and intentionally tease us with something too vague to really speculate on. In this case, it's something called Austin's Mystery Feature. Yes, that's all there is to know about it for now.

Note: We skipped this one when it turned up in v2.12 because there weren't any other immediately obvious changes, but it's worth a mention now.

Of course, we can't just leave it at that, so I dug deeper to find out who Austin is, learn about his entire background, and ultimately deduce the feature he would want to build!

Erm, actually, I didn't do that. I'm not even sure there's an Austin on the dev team. I mean, there probably is, but we're not creepy stalkers. Besides, he's probably a pretty chill guy and it would be super uncool to do that to him. Go ahead, Austin, take your time and make that feature as awesome as it can be. We'll be looking forward to it.