If you've purchased a new television in the last couple of years, it might be equipped with a feature called HDR, or High Dynamic Range. We won't get mired in the details, but let's just say it has a pretty noticeable impact on image quality, particularly in very dark or bright scenes. However, this doesn't do much good if the video you have to watch isn't properly encoded. The latest update to Play Movies & TV shows Google hasn't forgotten this fact, and preparations are being made to feature movies and TV shows delivered in HDR.

Before we get to the teardown, it's worth pointing out that there were some layout changes introduced with this update. The most striking are visible in the detail pages for movies and TV shows. 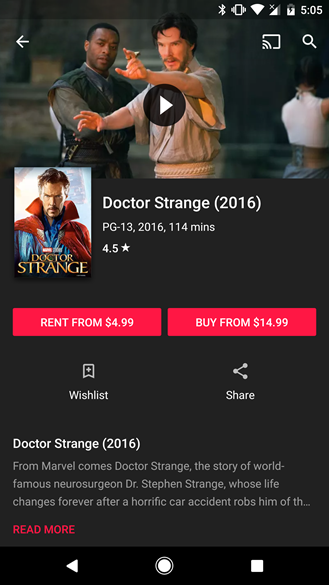 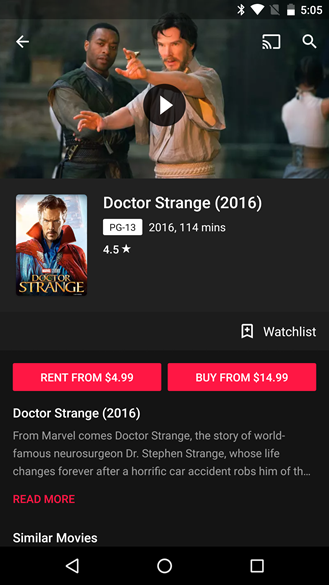 From the screenshots above and below, the most significant change is probably the removal of the Share button. Perhaps nobody was using it? The Wishlist button has been renamed to "Watchlist" and relocated to a row above the Buy/Rent buttons. While this creates a big gap of empty space, the button isn't as tall anymore, so it actually allows the content below to inch up the screen just a little bit. 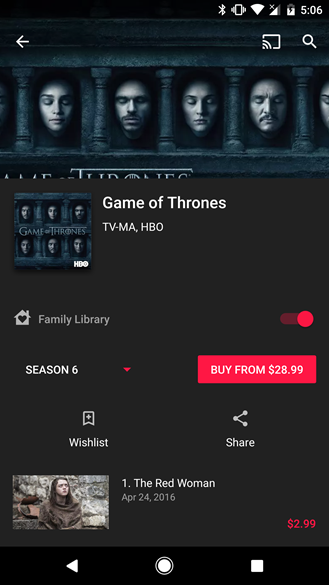 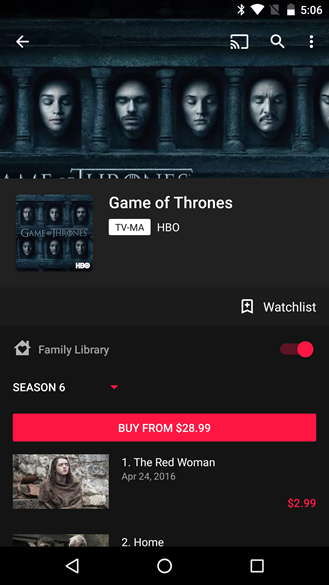 On TV listings, the season selector and Buy button have been split into separate rows. Since all of the elements on this screen are aligned to different places, it looks horribly imbalanced to me. It's weird enough that I've got a feeling something else is going to be added to these empty gaps in the near future.

Google's announcement of the Chromecast Ultra made a point of declaring that it wasn't just capable of 4K video, but it also supported HDR. Many people naturally asked what they would be able to watch in 4K with HDR, and the question was answered a few weeks later when YouTube officially added HDR support to its service, which already supported 4K video. When the Chromecast Ultra began shipping, the Play Store made good on a promise to make 4K content available for the Play Movies & TV app.

As some people are probably aware, that's not where the story stops. A number of people were disappointed–or outright angry–to find that videos from Play Movies & TV didn't seem to be available in HDR. Technically, it was never clear if Play Movies simply didn't support HDR, if it did support it but there was no content available in the Play Store, or it actually supported HDR all along but never actually displayed any markers as proof. Several complaints popped up around the web, but a community specialist piped up to confirm that HDR wasn't even supported by Play Movies. (Note: Community Specialists aren't always well-informed about technical details like this. Further research seems to corroborate his statement, but it could still be incorrect.)

Fortunately, this situation is going to be cleared up soon. The new version of Play Movies includes a line – yes, just one – that will be used as a marker for HDR content. Much like videos available in 4K, HDR will be listed in the detail pages for movies and TV shows as another feature.

For now, this is about all there is to say. After all, most of the questions center around the business decisions, not the technical aspects. There's currently no sign to indicate if HDR would have any different pricing. It also doesn't answer if previously purchased content will be upgraded if possible. And above all else, this gives us no insight into how many titles will be available in HDR at launch. It's pretty likely Google will make an official announcement when it's time to launch, so we'll probably get some answers soon.