Huawei used to avoid releasing high-end phones in the US, but no more. The Mate 9 was launched in the US several months ago, and it was announced as the very first phone to have Amazon's Alexa built in. However, that wasn't ready at launch, and Huawei didn't even know exactly when it would be available. Alexa finally rolled out to the Mate 9 several weeks ago, but Google sort of cut Amazon off at the knees by launching Assistant on the Mate 9 and many other phones while we were waiting for this update.

As I noted in the original Mate 9 review, this is a good phone—Huawei has really turned things around in the software, the battery life is killer, and the build quality is top notch. However, Alexa doesn't add much to this phone; in fact, it's kind of a flop. Still, the Mate 9 is one of my favorite phones right now.

I've used the Mate 9 on a regular basis since the review, which means I've loaded it up with all my usual apps and junk. I've also used it to test innumerable apps. You may have noticed all my YouTube TV screenshots were taken on the Mate 9, for example. Even with all that, the phone performs just as well now as it did when it was fresh out of the box.

Plenty of phones seem fast and long-lived when you first get your hands on them, but that changes a couple months down the line. You might load a phone up with files and apps only to find it's not the speedy hot rod you unboxed. I'm happy to say this has not been my experience with the Mate 9. I haven't detected any noticeable slow downs; apps are still quick to open, animations play fluidly, and even split-screen apps don't bog the phone down.

This device is powered by Huawei's custom Kirin 960 SoC, which is an octa-core chip with four Cortex-A73 cores (the latest from ARM) and four Cortex-A53 cores. Performance in benchmarks is close to the Snapdragon 821, and it feels about as fast as most devices I've used with that chip. The Pixel is still a bit faster, but the Mate 9 is easily as snappy as something like the LG G6. 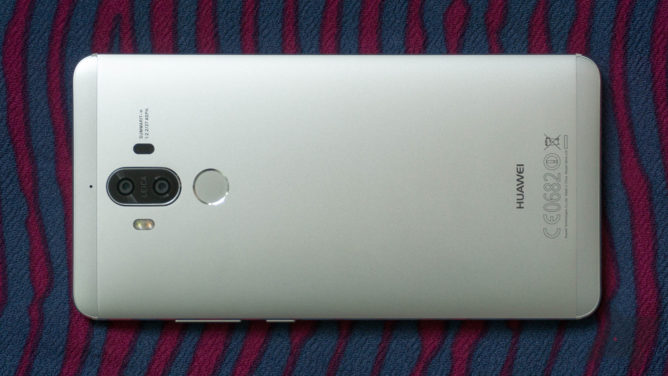 One of my favorite things about the Mate 9 when I reviewed it was the monster battery life. It's still monstrously good, which makes me very happy. I can use this phone for days at a time without plugging it in. Even if I use it rather heavily, the Mate 9 is good for two full days easily. With lighter usage, you could eke out three.

I think I've gone the better part of a week without plugging this phone into a wall. Just a few minutes plugged in while I'm in the car is enough to keep it going indefinitely. If you have a longer commute, I don't think you'd ever have to charge the Mate 9 overnight. I'm still not overjoyed by Huawei's proprietary fast charging system. Although, I've found that some USB-PD chargers will juice the Mate 9 at a slightly increased rate. It's not as speedy as the stock charger, but still better than a regular plug.

The Mate 9 has a large 4,000mAh battery, which certainly helps it last a long time. The 1080p display helps, too. I was a little worried at first that a 5.9-inch 1080p display wouldn't look good enough, but it's an LCD rather than AMOLED. That means it has a full RGB matrix for crisper lines at this density. I'm still impressed with this screen as well. It has great viewing angles and the black levels are incredible for an LCD. The brightness is also almost as good as modern AMOLEDs.

The Leica-branded camera on the Mate 9 has proven solid in my long term usage. There are actually two sensors, a 12MP RGB and 20MP monochrome. They combine to produce very crisp, vibrant images in most lighting conditions. It's not as good as the Pixel or GS7, mostly because of hit or miss low light performance. I really, really like the 2x optical zoom, though. Well, it's sort of optical. The device basically fakes zoom with a 12MP cropped image that doesn't lose detail. The result is the same, and I use it constantly. My biggest gripe is that HDR mode has to be manually activated, and that disables a lot of the camera's other nifty features. Here are a few pictures I've taken with the Mate 9 since the original review. The Mate 9 launched with Android 7.0 Nougat, for which I applaud Huawei. This phone dropped only a few months after the Pixel, so it was nice to have Nougat. However, it has not advanced to Android 7.1, nor has Huawei fixed the few niggling issues I have with its new EMUI 5.0 skin. Most notable among those is the lock screen, which is nearly useless. It only shows notifications once, then they won't appear again despite still being in the notification shade when the phone is unlocked. Ongoing notifications for playback controls aren't shown at all. Even the rotating background image feature of the lock screen is hit or miss; sometimes it just stops working.

On the plus side, the home screen defaults to having an app drawer, if you want to use the stock one. There's nothing special about it, so installing a third-party alternative is probably advisable. I don't dislike Huawei's home screen, but this is what I ended up doing. The notifications look a bit strange with the rounded corners, but they work in the standard Android way with bundles and even quick reply.

Google pushed Assistant to the Mate 9 a while back, so you can long-press the home button or say "OK Google" to pull it up. Assistant works the same on this phone as it does on the Pixel and other Marshmallow and Nougat phones. You can plug in services like Hue, IFTTT, and more. Alexa on the Mate 9 has some of the same headlining features, and in some ways it seems like it should be superior to Assistant. After all, Amazon has a ton of Alexa skills. The implementation, though, is disappointing. 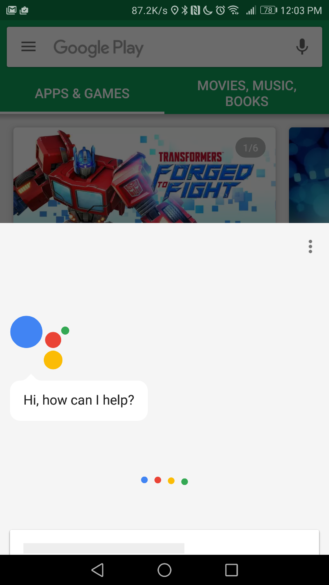 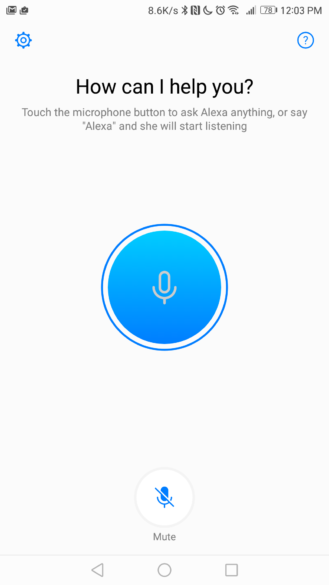 After installing the update, the Mate 9 has a new app called Huawei Alexa. Simply open and connect to your Amazon account to get started. The first thing you'll notice is Alexa doesn't respond to hotwords unless the app is actually open. When it is, you can say "Alexa" to begin a command. Leave the app, and Alexa stops working. For needing a firmware update to roll this feature out, it sure doesn't seem very tightly integrated.

The mere fact that you always have to launch the Alexa app to issue commands makes this only marginally useful. There's a shortcut to open the app, which is tied into Huawei's "motion control" features. These are buried in the Smart Assistance settings under "Draw." Basically, you can use your knuckle to tap on the screen (you really have to smack it) and draw a shape to launch apps. Alexa suggests you draw an "e" to launch it, which is indeed the default in motion control. However, this is off by default, which seems like an oversight. Even when you turn it on, this feature is pretty awkward. It fails to trigger sometimes, and the character recognition isn't the best. 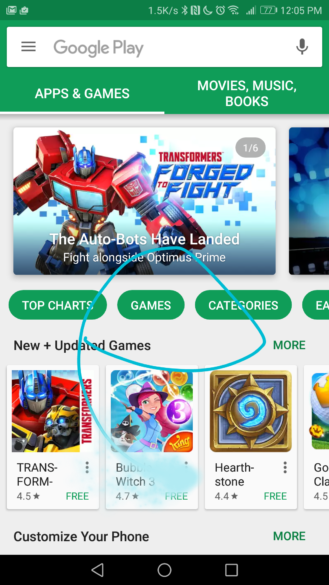 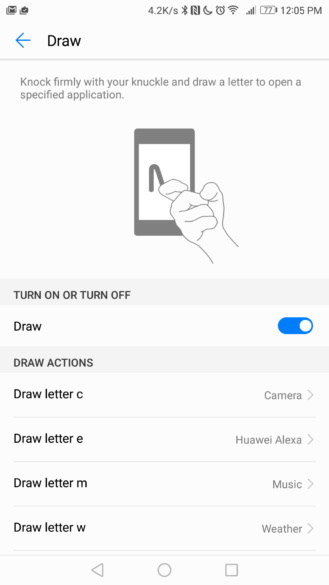 Using Alexa is rather hit and miss. It works with all the same skills as other Alexa devices, so you can use the web or Amazon's Alexa control app to add new ones. Then, simply tell the Huawei Alexa app you want to "talk to [skill]." However, there are some basic features that are simply missing. If you tell Alexa to play a song, it replies, "Amazon Music is not supported on this device." It says this whether or not you have the Amazon music app installed. Yikes. You couldn't build some sort of bridge between Alexa and the media apps on the phone, Huawei? Alarms too won't work in Alexa on the Mate 9. These are two of my most common reasons for interacting with a voice assistant. Again, Alexa was part of a firmware update, but it doesn't seem very integrated.

I will say that Alexa seems to understand my commands very well. After some adjustment to how it wants things phrased, it's able to answer some of the same queries as Assistant, and it has a lot more smart home functionality. Although, I'm annoyed I have to open the separate Alexa control app to get even basic details of my chat with Alexa. At least Assistant shows you the text of your current interaction.

The Mate 9 is still officially selling for $600, but you can get it a little cheaper if you look around. I'm not going to tell you this is the best phone on the planet, but it's a very good one. I like to gauge a phone's staying power by how often I use it after the initial review is done. A phone that I never voluntarily put in my pocket is not something I would tell people to buy. The Mate 9 is still something I drop my SIM card in on a regular basis for no other reason than I like it. The build quality is great, and I love the giant screen. It's about the same size as the Pixel XL, but with much more screen real estate. 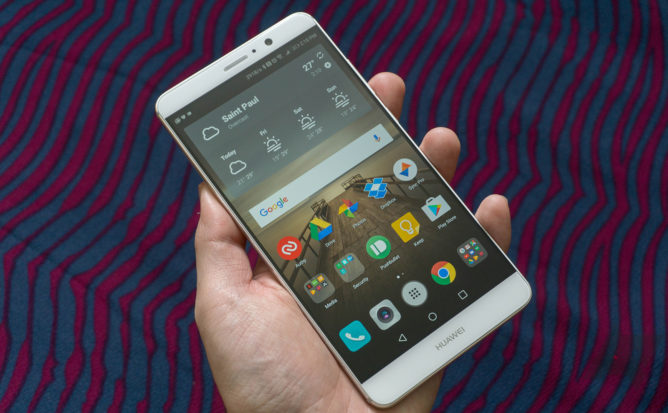 I don't know if you can expect more improvements in the Mate 9's software going forward, but EMUI 5.0 is good enough as it is. If you were anxious to get Alexa on this phone, I'm afraid that's going to be a bit of a bummer. It's missing a lot of features and Assistant is undeniably better on Android. The lack of a wake up word is a huge missed opportunity. You should only bother with Alexa if there's a specific platform that it can talk to that Assistant cannot.

If you want a high-end phone and happen to find the Mate 9 on sale, absolutely pick one up. I don't think you'll be disappointed.