Google has been tinkering with screenshots for a few months. First, some hidden code was found in Nougat that would trigger partial screenshot functionality, then we started hearing of a screenshot cropping and drawing option showing up inside the Google app. That last bit is starting to show for some users including our reader Nicholas who shared the news on Reddit and further explained how it works.

If you're on the lucky end of this server-side test, when you open the Google app, you'll be greeted with a new permission to access device storage. Google explains that this will be used to improve the handling of screenshots taken "in the app," so you should be ready for disappointment if you expected this to be a system-wide option.

After that, when you're inside the Google app and you take a regular screenshot with your device (power + volume down on most phones), a sharing menu will slide from the bottom of the screen with two new options: Crop and Draw. The first lets you crop a specific part of the screen, the second lets you draw on top of the screenshot with 6 different colors (plus an Undo option). When you're done, you can share the result to any other application. Here's a video of it in action:

This looks handy, even if it's limited to only the Google app for now and would be more beneficial as a system-wide option. Those of us with Samsung phones have been able to crop and edit screenshots for years now and even take scrolling screenshots on Nougat, and those with LG phones have had QuickCapture for years as well with the option to draw and crop any screen before even screenshot-ing it first.

But it's still a limited test. None of us here at Android Police have the feature yet, despite being on the same 6.16.31 beta release as Nicholas. It looks like the feature is still not ready for the public yet. By the time it is, I hope Google decides on a unified way of exiting the cropping and drawing modes. Having the "X Done" toast-like button at the bottom for the former and the X and checkmark bar at the top for the latter is weird.

The screenshot editing option has been rolling out to more people since we first spotted it, but it's starting to look a little different now. Here are some screenshots from our tipsters, +Adrian Bordoy and Gurkanwal Singh. 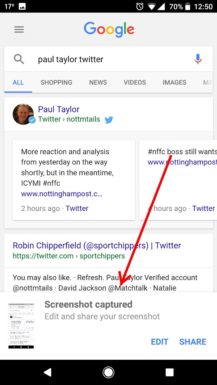 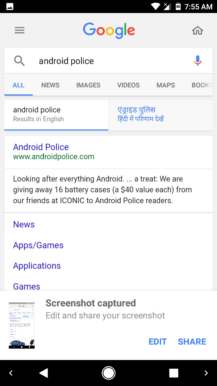 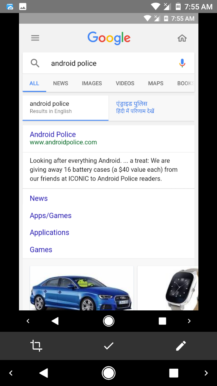