We've known for a while that multiple user support would come to Google Home. It only makes sense that a device placed in the home can be used by several persons instead of being linked to just one user's data and music and other accounts. But until now, we had only seen the signs of multi-user support in Cody's teardown of the app.

Today though, users have started seeing a new card in the Discover tab of the Google Home app titled "Multiple users now supported." The card says that you and others in your house can enjoy a "personalized experience" from Assistant on the Google Home, but so far the feature doesn't appear to be live just yet. 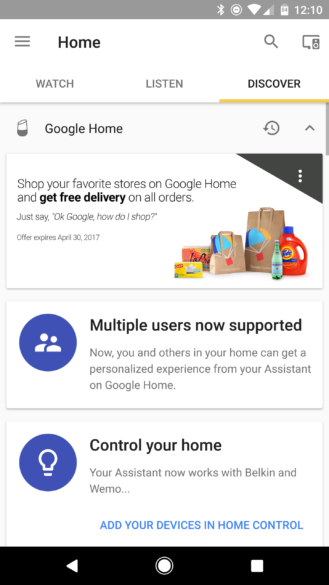 Maybe someone jumped the gun a little too soon on the new card, but it does tell us that the feature should be active soon. We've reached out to Google to clarify and will update this post if we get an answer.

Hopefully, this means that Assistant on the Google Home can catch up with the one on your phone and start offering all the options that were previously inaccessible due to privacy or security concerns, like adding personal reminders, sending messages, and creating calendar events.

Yes, it looks like the message was a little premature. An update to the Google Home app was just pushed (version 1.22.25.7) and it doesn't show the multiple user card anymore.

Ars Technica was also able to get a statement from Google saying, "We've seen the reports, and don't have anything to share right now." While we might disagree with Google about the meaning of the word "report" seeing as the notice was surfacing in their own app, it does look like multiple user support is still not fully ready to be rolled out.