Fake reviews on the Play Store, or any other online marketplace, are not new at all. But over the years, Google has stayed ahead of the curve with improved fraud and spam detection. But in the past few weeks, the amount of obviously fake reviews has skyrocketed.

The reviews seem mostly targeted at popular apps, especially from Google - including Hangouts, Gmail, and Chrome. Many of them talk about each app as if it were a game - mentioning power-ups, Poker, and Bingo. Last time I checked, Hangouts didn't have a Poker game built-in.

App developers paying for positive reviews is a somewhat common practice, but Google doesn't have a reason to do this. So why is it happening? One possible answer is that by reviewing multiple popular apps, each Google account would be less likely to be flagged by the company's spam filters.

Many reviews are harder to distinguish from real ones, by simply saying "Good" or "Great." Here are a few examples from the Chrome listing (found below a review mentioning Bingo): 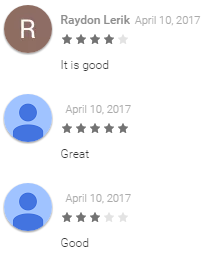 We reached out to Google about a week ago about this problem, but we did not receive a response. At this point, it's hard to imagine Google isn't aware of the problem - but it may be difficult to fix.

A Google spokesperson reached out to us, and provided the following statement:

"We're aware of the recent spammy reviews on Google Play and have taken action to remove them. We're constantly improving our system for identifying and removing fake reviews and ratings."