After I thought the whole slew of new unlimited data plans from all the carriers had subsided, Sprint is back again with some more news. Like before, this seems like the best deal of the bunch on the surface (if Sprint's network coverage in your area is good). However, the pricing you'll see in the graphic below is a limited time promotional deal — meaning that the price climbs after a certain time. Oh, and it's only available to new customers.

Before we look at the fine print, here's the official pricing straight from Sprint: 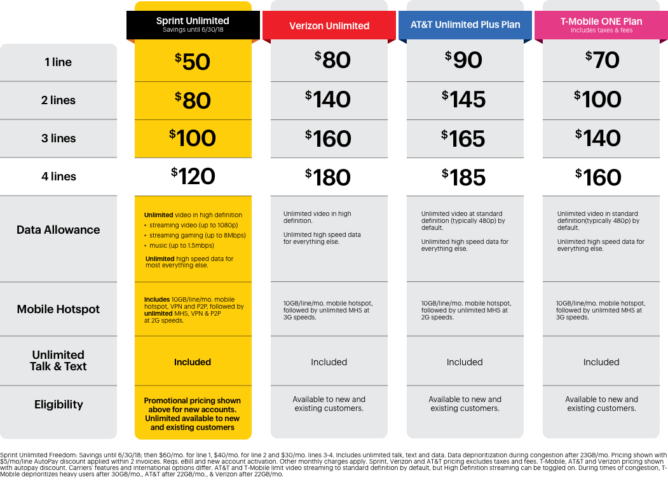 As with all of the carriers, the price-per-line decreases as you add more to your account. A $5 auto-pay credit is also factored into all of this. But in case you're having a hard time reading the fine print there, I've taken the liberty of typing up the important bits for you all.

$120 for four lines doesn't sound too bad, right? In the grand scheme of things, that is a good price while it lasts, even if it's Sprint. When the promo ends (June 30, 2018), you will end up paying $180/month for four lines, which brings it in line with T-Mobile's ONE plan... until you remember that Sprint's deal doesn't include taxes and fees while Tmo's does.

Not to be confused with Sprint's previous unlimited announcement (which ends tonight, according to the press release), this one has a bit lower pricing on the second line, but higher overall — if you'll recall, that promotion came out to $22.50/month for four lines. It also only lasted through March 2018.

Unlimited Freedom starts tomorrow, April 7, for new customers. Again, it looks like Sprint is only concerned with getting new subscribers, not with keeping the ones it has. We'll see how well that works out.

With Sprint Unlimited Freedom – starting on April 7 – new customers get1:

There’s no denying that the demand for unlimited has skyrocketed. With more sophisticated smartphones, innovative apps and an explosion in the popularity of social media, wireless customers need – and want – unlimited more than ever. And with its spectrum advantage and the capacity of its network, Sprint is best positioned to handle customers’ needs in an unlimited world.

Sprint has more spectrum than any other carrier in the U.S. With holdings of more than 160MHz of 2.5GHz spectrum in the top 100 U.S. markets, Sprint has the right kind of high-band spectrum that is built for data and very fast speeds. This is a tremendous advantage, allowing Sprint to keep adding the capacity and speed needed to meet customers’ increasing demand for data now and well into the future. Perfect for unlimited.

“More than 90 percent of our customers are already choosing Unlimited,” said Roger Solé, chief marketing officer. “During the past few months, we’ve seen other national wireless carriers offer unlimited plans, but their offers don’t match the value we provide. Within the first year, Verizon’s and AT&T’s unlimited plans will cost consumers at least 50 percent more!”

Sprint’s previous Unlimited promotion ends tonight, and the company is retiring its well-known “50% off” and moving away from its “Better Choice” metered plans.

“Sprint launched ‘50% off’ in 2015 as a bold offer to attract customers, and it was extremely successful,” said Solé. “Since then, Sprint has grown its customer base, improved its network, and elevated its brand. We’re now taking the next step in our transformation – simplifying the choice for customers by primarily offering one plan: Unlimited.”

With this bold move, Sprint is making wireless pricing easier for the consumer…and, as always, providing a compelling reason to switch.

Harry Wang, senior research director-Parks Associates, applauds the simplicity of Sprint’s Unlimited offer. “Sprint has been the only mobile operator in the U.S. sticking to unlimited data plans for customers all these years,” Wang said, “and the simplicity of unlimited data plan negates individual service features, such as data rollover or zero-rating video service. The return of unlimited plans from all major U.S. mobile operators is good news for consumers, and also reflects operators’ growing confidence in their network."

Unlimited is also available to business customers, who can sign up for an unlimited number of lines.

Libby can give you access to tons of free books and audiobooks on your phone with just your ...