Based on screenshots and tips we've received so far, it appears that there's a large selection of regional content. You can upload up to 50000 songs from your own collection for free and listen to them on any device connected to your account. But if you want to listen to music not in your collection, you have the option of subscribing to Unlimited, which is similar to All Access in other countries. 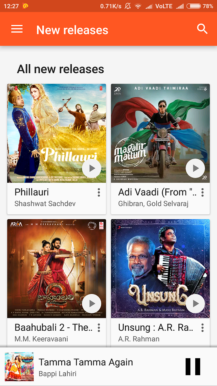 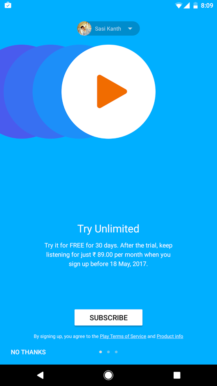 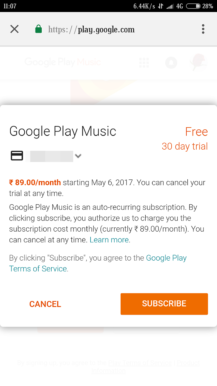 Users get a free month trial to check everything out, after which the monthly subscription is priced at Rs. 89 (approx. $1.4) before May 18. It looks like the regular price after that will be a little higher (Rs. 99 I suppose). The price is competitive compared to other streaming services available in India: Apple Music costs Rs. 120 and a few other options start at Rs. 99. It's not a big difference but it could play a small role in users choosing one or the other.

The official announcement has been published and it tells us there are 40 million songs available, with users being able to search by the name of their favorite Bollywood actor/actress and music directors and watch videos inside the app. It also reminds us that Unlimited includes the ability to download tailored playlists for offline listening to avoid eating through your data plan.