Out of all the Google apps that receive server-side changes, YouTube is one of the most prominent examples. It seems like YouTube is always experimenting with some sort of revamp, whether the changes are large or small. In this case, the changes are rather large; the comments section, which has been made a pop-up instead of a permanent part of the UI, now has an icon alongside the 'like' and 'dislike' functions.

This test focuses entirely on the comments section, which is an integral (and sometimes dark) part of YouTube. Essentially, the comments are no longer a permanent piece of the interface; instead, it's now a pop-up that you open with a new comments button that sits next to the 'like,' 'dislike,' and 'share' icons. And by the way, that 'save' function is part of YouTube Red, not the test itself. 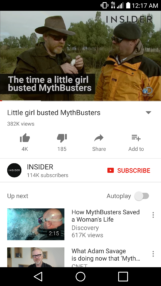 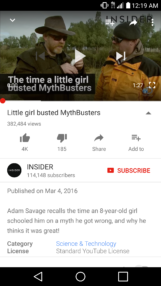 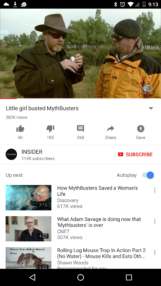 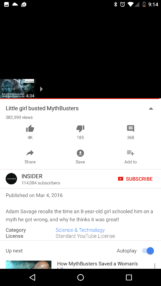 The new comments icon also displays the number of comments that people have made; in the case of this "Little girl busted MythBusters" video, it's 368. It's also worth noting that if you have YouTube Red (which adds that additional 'save' button) and a small-enough DPI, you may get two rows of icons with a slick animation when you expand the video's title to read the description. See the embedded video above for an example of this. 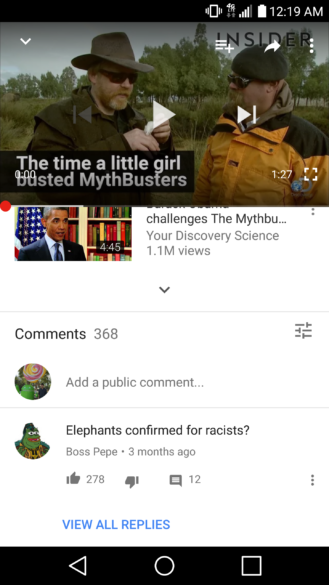 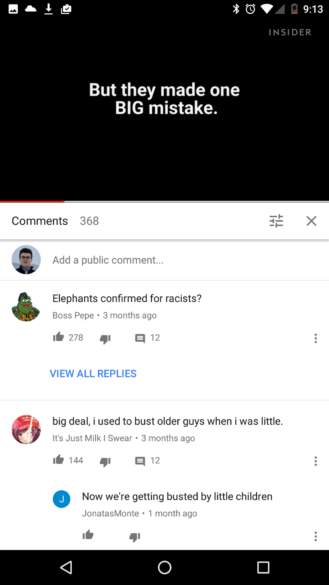 You'll need to click that comments icon that you saw above to view the comments section with this change. Notice how in the screenshot of the current UI (the one on the left), you can scroll directly from the "What's New" section to the comments. That's not possible with the new comments interface; you have to enter comments by hitting that speech bubble icon. To exit, you press the 'x' on the top right of the pop-up. The replies will still expand underneath the video, as we first saw here.

Personally, I don't really have a strong opinion about this new layout for comments. It doesn't make comments any easier to navigate, but it's not really any harder either. The only real advantage is the ability to see the number of comments without having to scroll down, but I doubt that's something that most people are concerned about. I suppose this layout makes things a bit less cluttered, with the comments tucked away until you want to read them?

Anyhow, keep in mind that this is just a test; there's no guarantee that this will be coming to everyone's devices.